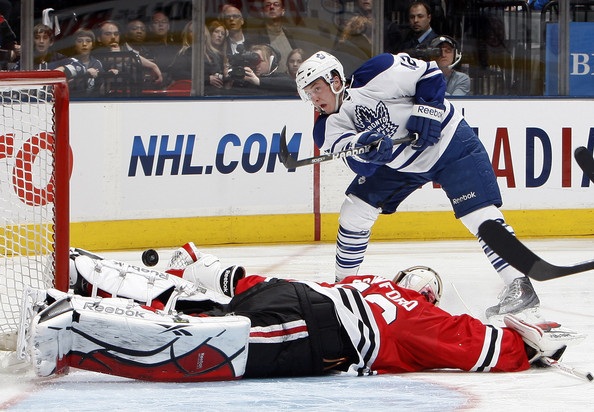 Coming into Saturday night’s game against the Blackhawks, the Toronto Maple Leafs were one of the hot teams in the Eastern Conference; a 6-1-3 in their last 10 games had them back in the playoff conversation.

But the Blackhawks didn’t seem to care.

As has been the trend during the Hawks eight-game winning streak, the scoring came from all over the Blackhawks roster. Jonathan Toews continued his ridiculous scoring streak, as did Marian Hossa. But goals from Michael Frolik, Bryan Bickell and Viktor Stalberg showed the continued strong depth for Chicago.

The Blackhawks have now scored at least four goals in six of their last seven games.

Corey Crawford made a number of spectacular saves again, keeping the game from becoming a more competitive, high-scoring affair. The third period saw Toronto switch goalies and throw a lot of rubber on net, but Crawford was up to the task. He allowed three goals on 33 shots in the game.

The Blackhawks killed all five of the Leafs power play opportunities.

One negative from the game was Duncan Keith taking a shot to the hand. He was limited to 16:25 in the game.

The Blackhawks are 5-0-2 in their last seven road games, and have 80 points. Crawford has earned the win in all eight of the consecutive wins.