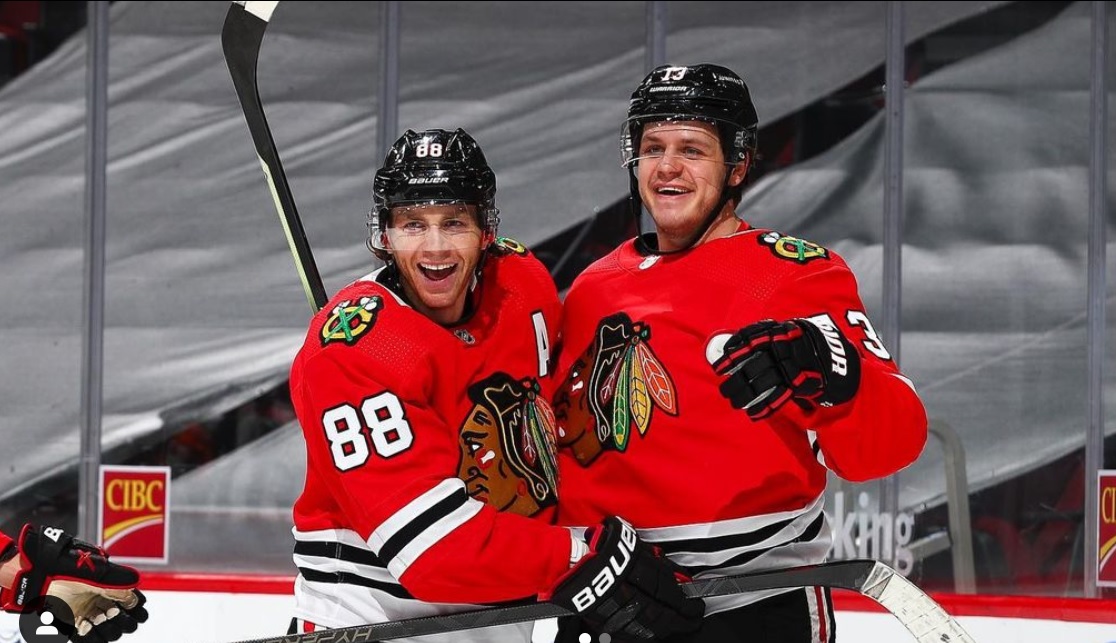 On Thursday and Friday nights, we found out the Chicago Blackhawks in midseason form can compete with the defending Stanley Cup champions from Tampa. An overtime loss with 0.1 on the clock and a shootout victory proved the Blackhawks have come a remarkably long way from their season-opening debacle(s).

Of course that also means the Bolts now realized the Blackhawks were playing confident hockey. And after splitting the first two games, Tampa was undoubtedly going to come out looking to put away the third game of the set.

So coach Jeremy Colliton opted to roll with seven defensemen. Calvin de Haan was injured early in the third period of Friday’s game so Wyatt Kalynuk made his NHL debut. Lucas Carlsson also dressed on the blue line.

Connor Murphy complicated matters for the Blackhawks defensive group in the second period when he received a match penalty. That was only one of the many issues that saw the game turned around quickly in the middle stanza.

The first period went well for Chicago. Almost 11 minutes into the first Philipp Kurashev finished a terrific shift with his sixth goal of the year.

The Hawks held Tampa to seven shots on net in the opening 20 minutes and controlled a good amount of the action. Kevin Lankinen stopped all seven shots and looked good after the tough late loss on Thursday.

After the Suter goal, Tampa cranked up their intensity. The game got more physical on both ends of the ice; the Lightning were far more frequently the hammer instead of the nail.

Futher complicating matters was the Blackhawks willingly taking penalties throughout the period.

And Yanni Gourde scored 23 seconds later to quickly cut the Blackhawks lead to one.

The game continued to get more intense and more physical. At 9:24 into the second Murphy obliterated Erik Cernak, getting him the early showers.

Connor Murphy given match penalty on this hit to the head on Erik Cernak #Blackhawks #GoBolts pic.twitter.com/5EaIJDBBBb

The Hawks survived the major penalty, thanks in large part to Hedman going to the box for a couple minutes in the middle of the five. But Janmark going off soon after the major ended was more than the Hawks’ PK could handle.

Gourde scored his second of the period and the third power play goal of the frame for Tampa, giving the Bolts a 4-3 lead.

The wheels were off the track. The Blackhawks were chasing badly and Tampa was in control. Four different Blackhawks served a penalty in the second period, they lost another veteran defenseman and a three-goal lead became a one-goal deficit.

Tampa out-shot the Hawks 16-6 in the second period.

The Hawks would desperately need to stay out of the penalty box in the third if they wanted to take a third game to overtime at least, if not pick up a regulation victory.

Lakinen’s save percentage wasn’t great but he was making good saves. He started the third playing well again; Tampa continued to carry the action early. Ryan McDonagh went to the box in the middle of the period but the Blackhawks couldn’t convert.

The next goal would likely be huge and it was – coming off the stick of Alex Killorn at 14:25 into the third. Gourde picked up an assist on the goal, his third point of the day.

The Blackhawks had five minutes to score twice with three rookie defensemen (and Adam Boqvist) available to Colliton.

Turnovers continued to make life miserable for the Hawks. With four minutes left in regulation, Duncan Keith hooked Pat Maroon who had the puck behind the Chicago defense. One of the Hawks’ two veteran defensemen would sit, potentially, for two of the final four minutes of regulation.

Not an ideal scenario.

However, Hedman coughed up the puck twice while on the power play and Janmark had two quality looks at the net. But Andrei Vasilevskiy, who the Blackhawks got to pretty well in the two games he started, slammed the door on both Janmark shots.

Of course the puck then heads the other way after a Vasilevskiy save and Maroon knocks in a rebound to make the score 6-3 for Tampa; the Bolts had scored six unanswered and shut down any chances the Hawks had of rallying in the third.

The game would end with the Blackhawks losing by three after leading by three.

In all three games of this series, a team took a two-goal lead to start the game and then lost the game. The Blackhawks picked up three points in the three games against the top team in the division and, for seven and a half periods, competed with Tampa.

With de Haan out for the time being we’ll have to wait and see if Murphy receives any discipline from the league for his hit on Cernak. Losing both of those veterans at once would be a tough blow to Chicago’s back end.

For those watching the Chicago broadcast, it was nice to have Patrick Sharp pinch-hitting for Edzo in the booth. His comments about playing with Brent Seabrook were great to hear.

Sharpy joked with Pat Foley that he was more nervous for today's call than his first NHL game!

How do you think he's doing so far? pic.twitter.com/1Fdcv5e3Kz

59 thoughts on “Blackhawks Cough Up 3-Goal Lead, Get Blown Out By Bolts”