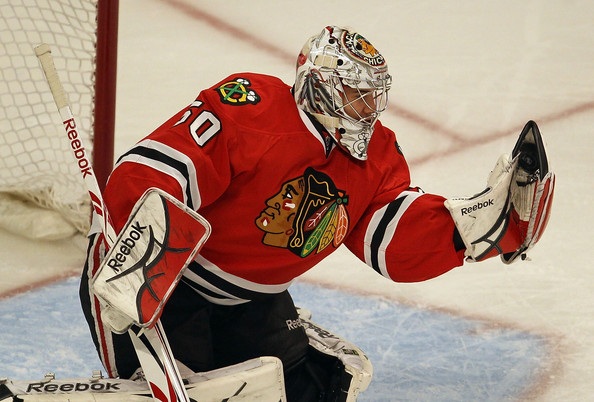 After a rough stretch of games in mid-March, during which the Hawks went 1-2-2, it appears they have found their groove again.

And it begins on defense.

In the last two games, Corey Crawford has been outstanding. He’s kept 45 of 46 shots (.978 save percentage) out of the net, posting wins against Phoenix and Florida.

While Crawford has made key saves at critical times, the guys in front of him have been equally impressive in the last 120 minutes.

Against Phoenix, the Blackhawks blocked 22 shots while allowing only 23 to reach Crawford. In that win, both goals were scored by defensemen (Duncan Keith and Chris Campoli).

On Wednesday night against Florida, the team defense was suffocating. The Hawks were only credited with nine blocked shots, but were also credited with 13 takeaways.

During the two games, newcomer Campoli has been exceptional. He has skated a combined total of 43:28 and has been credited with one game-winning goal, six blocked shots, four hits and one takeaway.

Likewise, Brent Seabrook has been outstanding over the last two contests as well. In 48:30 total ice time, Seabrook has been credited with seven blocked shots, three hits, one takeaway, one assist and, like Campoli, one game-winning goal.

Indeed, Wednesday night was arguably the finest performance of the season for Seabrook.

The boys on the blue line haven’t been alone in helping Crawford out, though. Marian Hossa has been credited with five takeaways in the last two games, and Michael Frolik was credited with three blocked shots in the win at Phoenix.

History shows that the winning formula in Chicago is simple: keep the puck away from the net and score. After a few ugly efforts, the Blackhawks appear to have remembered what works.