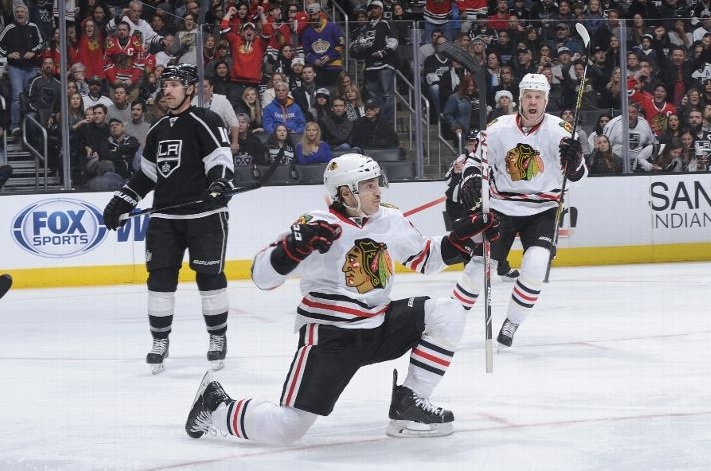 Richards scored twice and Versteeg picked up assists on both of his linemate’s goals as the Hawks ran away from the Kings in a complete 4-1 victory. Daniel Carcillo opened the scoring int he first period, and Richards would scored the eventual game-winner with 2:01 left in the opening period.

Jordan Nolan, getting into a rare game this season, cut the lead in half but Richards would add his second less than three minutes later. Brandon Saad would add an empty net goal in the game’s final moments to push the final score to 4-1 in favor of the visitors.

Richards finished the Circus Trip with five points (three goals, two assists) in six games. Versteeg finished the trip with two goals and six assists in the six games; he had three multi-point games on the trip.

Corey Crawford also had a magnificent trip. He finished the trip with a 19-save performance in his 14th consecutive start. Crawford posted a 5-1-0 record with a .929 save percentage on the trip, stopping 143 of 154 in the six games.

Jonathan Quick allowed three goals against 24 shots in the loss.

Because the Hawks were able to control the puck and the score, coach Joel Quenneville was able to spread out the ice time once again. Even with David Rundblad only taking two shifts in the third period, only four Blackhawks were over 20 minutes in the game. Niklas Hjalmarsson led the way, skating 25:48 with Johnny Oduya, Duncan Keith and Brent Seabrook also going over 20 in the game.

Up front, it was Richards leading Hawks forwards with 19:01 on the ice. Patrick Kane skated 18:51 and failed to register a point in the game, but his Circus Trip comes to a close with four multi-point games. Kane had four goals and five assists on the trip.

Crawford finished the month of November allowing 27 goals in 14 games with a .929 save percentage for the month. He was 9-5-0 in November.

And since the wheels supposedly fell off in a lackluster loss to the Red Wings on November 14, the Hawks are 6-1-0 and have outscored their seven opponents 29-14.