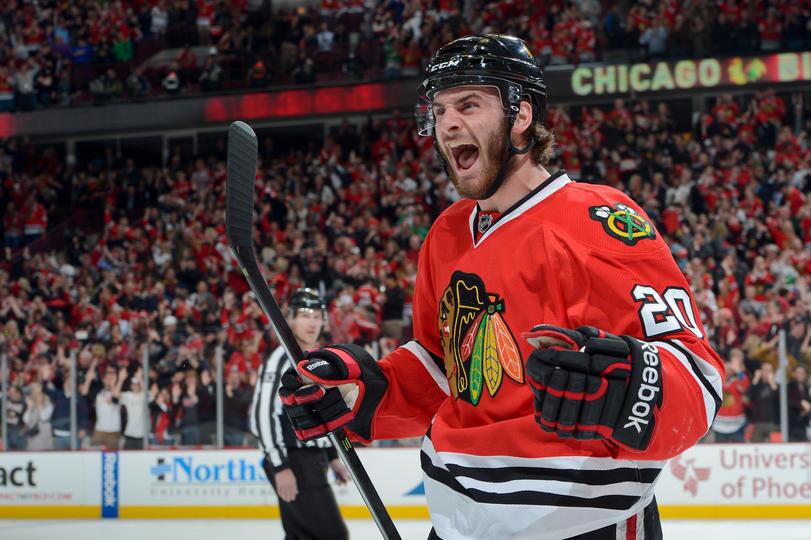 After Game One ended 2-1, it appeared the champion of the Western Conference would be the team to score a second goal first four times. On Sunday night, it didn’t take as long for the Blackhawks to hit that benchmark.

The Hawks had two goals on the board at the end of the first 20 minutes of play, Jonathan Quick allowed four goals and didn’t finish the second period, and Chicago ran away with a dominant victory.

Corey Crawford was solid once again between the pipes, but it was a play he made after the whistle with around six minutes left in the third period that brought the biggest cheers from the faithful in attendance at the United Center.

With Chicago up 4-1, former-Hawks forward Colin Fraser took a shot at Jonathan Toews. Michal Rozsival took exception to the cheap shot, and subsequently dropped Fraser. Behind those two, LA tough guy Kyle Clifford grabbed Toews and started to jab at the Hawks’ captain. Crawford noticed, and quickly wrapped up Clifford.

After the play, a helmet-less Toews skated over with a smile on his face and smacked Crawford’s backside to thank his netminder. That exchanged resulted in a Kings powerplay that was crushed.

Tyler Toffoli scored a powerplay goal for the Kings with 62 seconds left in the third period, but the Hawks’ penalty kill was lethal once again. Chicago killed three of the Kings’ four powerplays in the game; the goal by Toffoli was the first powerplay goal allowed by the Hawks at the United Center during this postseason. It came with Duncan Keith in the box after he put a clearing attempt into the expensive seats.

Crawford stopped 29 of 31 shots in the game to earn another victory.

Rozsival was very physical for the Hawks in the game, leading Chicago with six hits. The Blackhawks were credited with 36 hits in the game, and matched the physical play from LA throughout the game.

Andrew Shaw was credited with five hits and also scored the game’s first goal. Shaw’s goal came less than two minutes into the first period and took some wind out of the sails of a Kings team that was without Mike Richards, who sat with an upper-body injury after getting leveled by Dave Bolland on Saturday.

Toffoli replaced Richards and played effectively, scoring the late powerplay goal and assisting on Jeff Carter’s goal late in the second period. Toffoli confirmed after the game that he didn’t know he was playing until after warm-ups.

With only 51 seconds left in the first, Marian Hossa dropped the puck for a hustling Brent Seabrook who put a missile past Quick to make the score 2-0 at the end of one. Note in the video below that Seabrook makes a hit in the corner behind the play, but skates himself into position to score the goal.

In the middle of the second period, the Hawks scored twice inside two minutes to chase Quick.

Bryan Bickell was credited with a powerplay goal (though it appeared Robyn Regehr put the puck into his own net), his sixth of the postseason. Bickell once again skated with Toews and Hossa and gave the Kings fits in front of the net. He was also credited with three hits and a blocked shot.

Less than two minutes later, Patrick Sharp and Michal Handzus took advantage of a 2-on-1 breakaway and Handzus ended the night for Quick. Handzus now has a five-game postseason point streak (not bad for a trade deadline acquisition that continues to be mocked by many). Sharp had the primary assist on both of the Hawks goals in the second period.

Once again, the Hawks depth came into focus; ten different Blackhawks registered a point in the Game Two victory.

Brandon Saad had two assists as well, and continues to look more comfortable since he was moved to a line with Shaw and Viktor Stalberg. Stalberg, Toews, Kane and Hossa all had assists in the game as well.

The Hawks head to Los Angeles with a two-game lead in the series, but the Kings have been fantastic at home during the postseason. Chicago’s depth and speed will need to continue putting pressure on the Kings and Quick for the Hawks on the West Coast. 42 thoughts on “Blackhawks Dominate Kings, Head to LA Up 2-0”