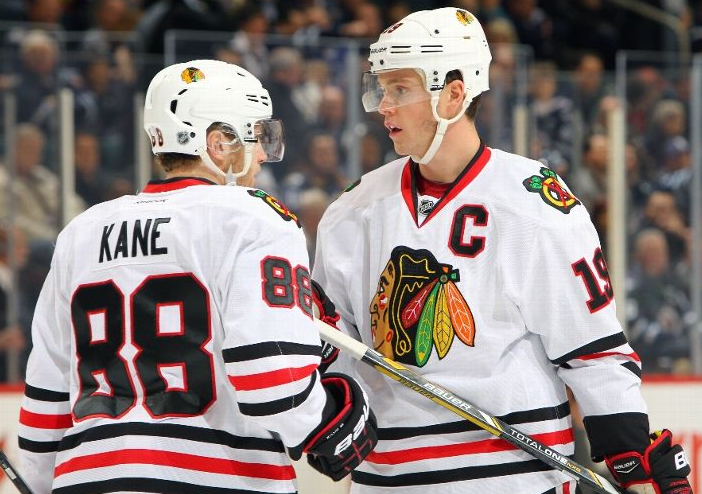 Over the last few days, NHL.com has ranked the top 14 players at each position in the league heading into the 2014-15 season. Predictably, the Blackhawks were very well represented.

If Crosby is the Best Player In The World, then maybe Toews is the best all-around player. He’s been in the MVP discussion but has yet to win. He does do a lot of winning though.

Kane’s blazing speed and dazzling stickhandling make it easy to see why two voters selected him as the top right wing in the League. The No. 1 selection at the 2007 NHL Draft scored 29 goals for Chicago last season and averaged a point per game. Kane and Blackhawks captain Jonathan Toews signed eight-year contract extensions on July 9 worth $84 million.

One of the best two-way forwards in the sport, Hossa continued to show consistency in Chicago last season when he reached the 30-goal plateau for the eighth time in his career, despite missing 10 games because of injury. Hossa enters this season five points shy of 1,000.

The Blackhawks love the stretch pass, which suits Sharp’s game perfectly. He’s on the receiving end of many of them because his speed and awareness allow him to clear the zone quickly and get into open ice, behind the defense. He has 194 goals in the past seven seasons, second most on the Blackhawks behind captain Jonathan Toews‘ 195.

Keith is not Blackhawks coach Joel Quenneville’s go-to defensive stopper, but there’s a good reason for that. Quenneville prefers to give the 2014 Norris Trophy winner ample opportunity to produce on offense, and Keith takes full advantage. No NHL defenseman has more than the 286 points Keith has put up during the past six seasons, and his 55 assists last season were tops among defensemen and sixth in the NHL overall. Keith is also extremely durable, missing 18 games in his nine NHL seasons.