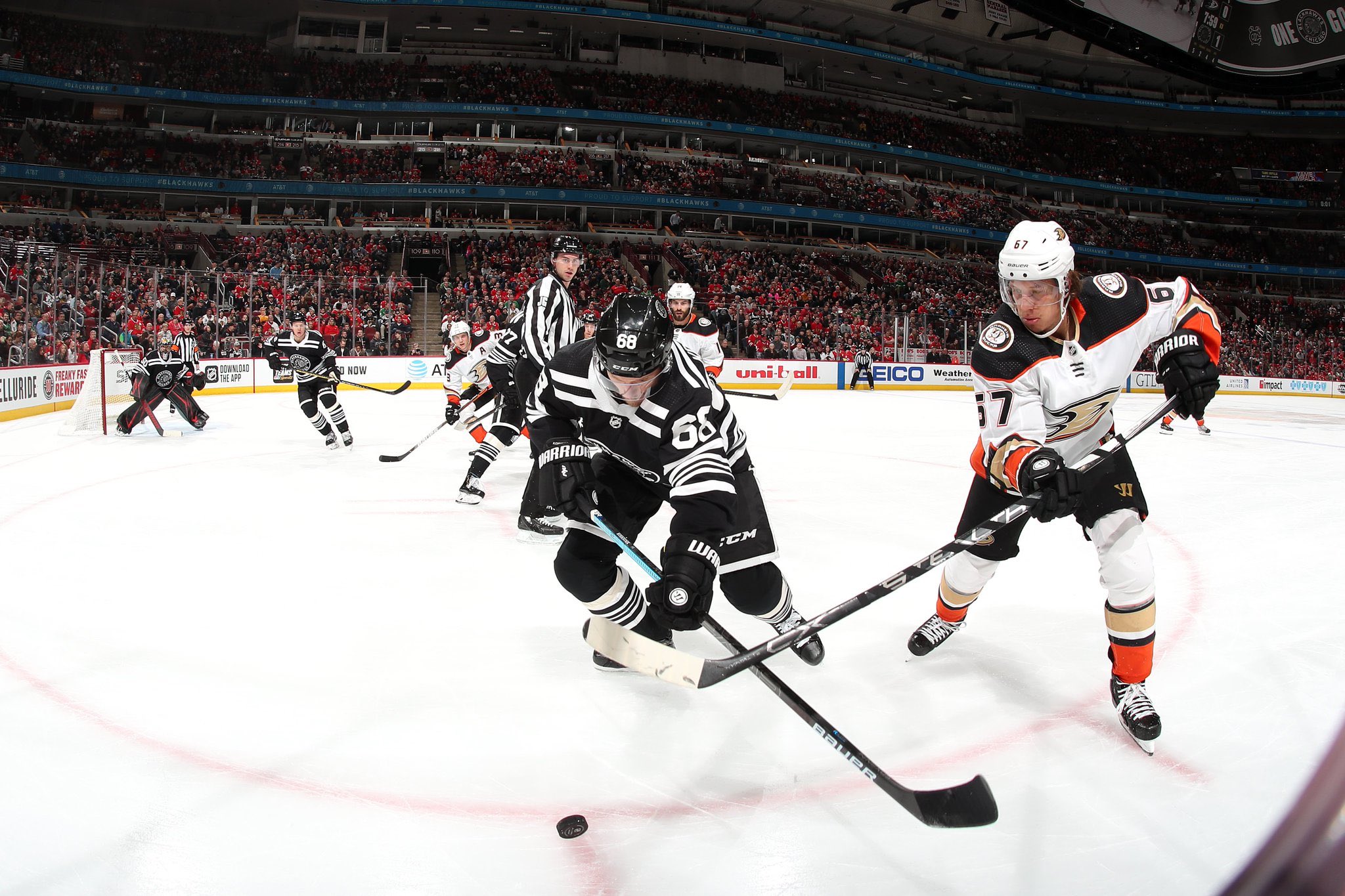 The Anaheim Ducks came into Chicago on Tuesday night winners of three of their last eight games. They’ve struggled since the trade deadline and the Blackhawks were coming home with two pretty big wins to finish their latest road trip. Could the Blackhawks stay hot against a struggling Ducks team?,/p>

The first period passed pretty quickly, and Anaheim dominated it. The Ducks out-shot the Blackhawks 16-6 in a penalty-free 20 minutes. But it was Chicago that got on the board first.

Kirby Dach showed terrific patience crossing the offensive zone before giving the puck to Adam Boqvist, whose shot-pass game continues to impress. This time he found Drake Cagguila on the doorstep to give Chicago an early 1-0 lead.

The goal made a bit of NHL history as well. According to the NHL, Boqvist and Dach picking up assists on the goal marked the first time in NHL history that multiple players born in the 2000s factored on a goal. Not that we needed to feel old, but that’s ridiculous. And gives Hawks fans some hope for the future.

If the Hawks clinging to a 1-0 lead despite being outshot by 10 in the first gave some fans pause, the second period pointed to the Blackhawks taking advantage of a bad Anaheim team and wanting to be part of the playoff conversation.

Dylan Strome found himself in the right place at the right time 3:46 into the second and Chicago had a 2-0 lead.

Boqvist picked up a second assist in the game on the Strome goal; Duncan Keith had the other helper.

The lead was two for all of 34 seconds. Danton Heinen got Anaheim on the board and it appeared the Ducks were going to push back.

At 5:54 into the second, Patrick Kane went to the box. He was joined by David Kampf 96 seconds later, giving the Ducks an opportunity to climb back into the game.

The Ducks did not push back. They got run over.

Chicago killed the two overlapping penalties and then exploded offensively in the final five minutes of the period to blow the game wide open.

Strome scored his second of the night at 15:29 into the second. Patrick Kane picked up the primary assist on Strome’s 12th of the year.

Lucas Carlsson picked up his first NHL assist on the Strome goal that gave Chicago a 3-1 lead.

At 18 minutes into the second, Boqvist created more offense for Chicago – this time from the defensive end. The rookie defenseman broke up a potential breakaway with a great stick and the puck quickly flipped ends of the ice. Alex Nylander got in on net with Jonathan Toews on the opposite side of the net and one poor defenseman trying to cover both. Nylander handled the business end, giving the Hawks a 4-1 lead.

Immediately off the following faceoff, the Hawks attacked. Nylander set up Kane with a nice dish to give the Hawks a 5-1 lead.

That helper gave Nylander two points in 15 seconds. To put that in perspective, Nylander had four points in February and had seven points in 21 games since the calendars rolled over to 2020. The kid turned 22 on Monday and celebrated with 15 terrific seconds in the late stages of the second period.

The Hawks out-shot the Ducks 18-13 in the second period and exploded for four goals. Neither team scored a power play goal and the Ducks appeared to be frustrated and tired by the end of the second.

Ryan Miller replaced John Gibson to start the third period. Gibson was on the hook for all five goals against 24 shots through 40 minutes.

Early in the second period Ryan Getzlaf caught Corey Crawford on the way by with a knee to the side of Crawford’s head. He remained in the game for the time being but at the next stoppage two minutes into the third the concussion spotter apparently called for Crawford to come off the ice. So we got our first taste of Malcolm Subban in a Blackhawks sweater beginning with 18 minutes left in regulation.

Subban’s initial appearance for the Blackhawks lasted 70 seconds. He didn’t face a shot on goal before Crawford returned.

The Ducks started to get chippy, finishing their hits whether the puck was still with a player or not. After a few intriguing moments, Ryan Getzlaf took a seat for tripping Dach at 4:43 and Chicago got a power play for the second time on the night.

The Hawks did nothing with the power play. Anaheim appeared to gather some momentum from the penalty kill. At 8:26 into the third the Ducks scored their second of the night when Carter Rowney threw a wobbling puck on net through a lot of traffic in front of Crawford.

With 9:14 left in regulation, Cagguila was sent to the box. Chicago was hanging onto a three-goal lead. The best scoring chance on the power play came from Matthew Highmore, who got a breakaway but couldn’t convert with 11 seconds left in the Anaheim advantage.

With five minutes left in regulation, Highmore created another scoring chance that the Hawks were able to finish. Highmore set up David Kampf for a tap-in goal (that Kampf still almost botched) and Chicago led 6-2.

Kampf had one point in his previous 15 games, so the finish was sweet. Highmore had a good night in a bottom-line role; he appears to be a guy who could play a role in the future. He probably could have played a bigger role all year if the Hawks hadn’t committed an NHL roster spot to Zack Smith.

From there the Hawks were able to play keep away. Chicago out-shot Anaheim 16-10 in the third period and 40-39 in the game. Crawford was good and able to finish the night and the offense was terrific in a third consecutive win.

Strome had a terrific night at the center position. He finished with one goal and two assists and was tied with Kane for the team lead with five shots on net. Strome won six of 12 faceoffs. He had just four points in 16 games since the calendars rolled over to 2020 coming in and matched his entire offensive output of three points for the entire month of February in his first game in March.

Toews was dominant at the dot, winning 15 of 24 faceoffs. He skated heavy minutes and did a terrific job controlling the action while on the ice. He was credited with two shots on net.

Carlsson picked up his first career NHL point. He also picked up one blocked shot and three hits on the night.

Boqvist had a stellar offensive performance early. He put one shot on net and was credited with two blocked shots and one hit as well.

Nylander skated 13:48 with one goal, one assist and three shots on net.