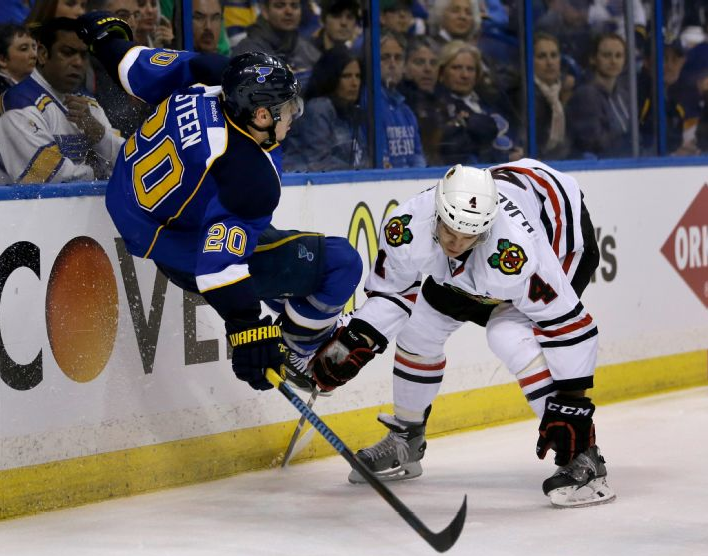 The Blackhawks started their second straight playoff series with a game that lasted into a third overtime. Unfortunately, the Blues escaped with a 4-3 victory.

Both goaltenders were phenomenal after allowing five combined goals in the first period. Ryan Miller allowed three goals against seven shots in the opening 20 minutes, but was perfect against 35 shots in the 80-plus minutes of hockey that followed to earn a Game One victory.

Corey Crawford faced 52 shots in the game, making 48 saves. Like Miller, he was exceptional for most of the night, but a couple good passes by David Backes and Steve Ott set up Alex Steen for the game-winner only 26 seconds into the third overtime.

The Hawks got goals from Johnny Oduya, Brent Seabrook and Patrick Kane in the first period, and the offense looked good. Kris Versteeg had a very good opening period, setting up Seabrook’s goal; he was initially credited with Oduya’s goal, but it was later (correctly) credited to the Hawks’ defenseman.

Chicago’s defense was great in the second, allowing only three shots on net and maintaining the 3-2 lead. Miller bounced back from a rough opening period to make a number of key saves to keep St. Louis in the game, and the third period brought a better offensive attack from the home team.

The Blues put 14 shots on net in the third period, and Jaden Schwartz tied the game up with only 1:45 remaining in regulation.

One overtime came and went without a score.

Then a second overtime. Same result.

But the first shift of the third overtime ended the game, as Steen buried the game-winner.

Duncan Keith and Niklas Hjalmarsson both skated over 40 minutes in the game, and Hjalmarsson blocked a team-high six shots in the game. Coach Joel Quenneville sent Hjalmarsson and Oduya out against the Backes line to open the third overtime, a shift that ended with Steen’s goal. It was Hjalmarsson’s 61st shift of the night.

Jonathan Toews returned from injury and played well. He skated 32:37, won 21 of 32 faceoffs and was credited with two assists in the loss. Chicago’s captain led all forwards in ice time on the night in spite of taking a big hit from Ryan Reaves early in the game that resulted in Toews bleeding and laboring to the bench. He didn’t miss a shift.

Kane also returned from injury, wearing a knee brace. He skated 28:31 with a goal and a blocked shot. Kane and Sharp led the team with six shots on net each. After the game, Kane said he felt “alright.”

Michal Handzus skated 25:55 in the game, winning 13 of 24 faceoffs. Bryan Bickell and Brandon Bollig were credited with a team-high six hits each.

In 37:37 Seabrook had a goal and an assist with two blocked shots and four hits.

For St. Louis, Jay Bouwmeester didn’t take a shift in the second overtime but returned to the bench for the start of the third period. Backes returned from an injury to skate 33:33 and was credited with seven hits and three blocked shots in 57 shifts.

The Hawks power play scored once in six opportunities, and successfully killed all four of the Blues’ advantages. 94 thoughts on “Blackhawks Drop Game One In 3OT”