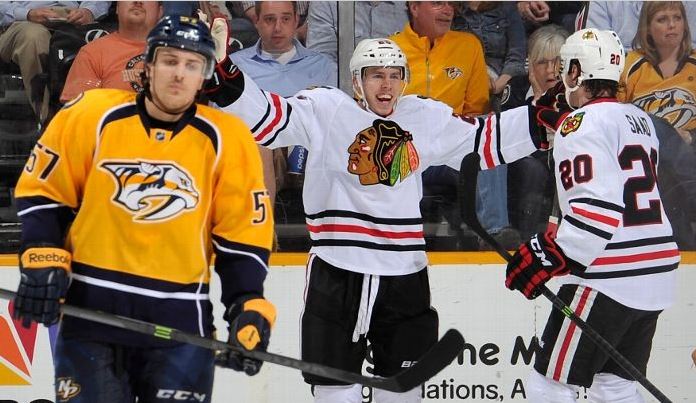 The Blackhawks lost the final game on their regular season schedule on Saturday night, falling 7-5 in Nashville.

Duncan Keith sat for a second straight night, and was joined in the press box by Niklas Hjalmarsson and Marcus Kruger. Nick Leddy, who was minus-four in the game, skated in his 82nd game of the season. Leddy hasn’t missed a game in three full NHL seasons.

Marian Hossa and Patrick Sharp were reportedly both given the option to take the night off, but dressed anyway. Hossa scored his 30th goal of the season in the first period, and was taken out of the game as a precaution. He skated only five shifts in the game.

Andrew Shaw scored his 20th of the season late in the third period with the Hawks’ goal empty to tie the game. Unfortunately, Nashville scored twice in the final 60 seconds to close out the game.

Brandon Saad had two assists, Ben Smith scored his 14th of the season and Jeremy Morin continues his strong play with fifth goal of the season. Morin has scored four times in the last five games.

Antti Raanta had a frustrating night, allowing six goals against 32 shots. Nashville converted most of their better scoring chances against a less-than-stellar defensive performance. David Rundblad played… and was minus-three in just over 12 minutes of ice time.

What matters from Saturday night: everyone that started the game left healthy.

The 107 points accumulated by the 2013-14 Blackhawks is tied for the second-highest total in team history, but is only good for third in the Central Division this season.