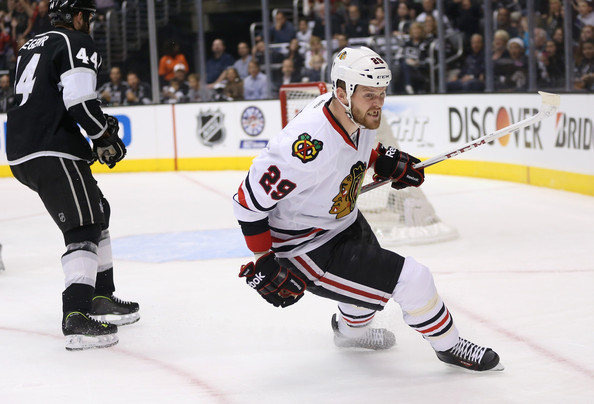 With Duncan Keith watching while suspended, the rest of the Chicago Blackhawks played a superb defensive game – especially in the third period – and ended the LA Kings’ home winning streak with a dramatic 3-2 victory. Sheldon Brookbank stepped into the lineup for Keith, and was minus-two in only 12 shifts and 6:50 on the ice. Nick Leddy only skated 11:12 in the game as coach Joel Quenneville relied heavily on his top four defensemen.

And they were fantastic.

After taking a shot to the “lower-body” in Game Three, Niklas Hjalmarsson stepped up and played a magnificent game. He skated 24:57 in the game, and was credited with two assists and two blocked shots. But his activity around the Hawks’ net and hard work all over the defensive zone led a stellar effort from the defensemen for Chicago.

Michal Rozsival, who had been on the Hawks’ bottom pair in the first three games, was asked to fill the void left by Keith and played his best postseason game in a Hawks’ sweater. He skated 25:28 in the game and was only credited with two hits, but his effort was huge in the victory.

Brent Seabrook led all Blackhawks with 26:20 in the game, and also led the team with three hits. Johnny Oduya was on the ice for 22:54 and was credited with the secondary assist on Marian Hossa’s game-winner.

Hossa had a strong performance, as did Patrick Kane. Kane broke out of his scoring drought, tipping home the Hawks’ second goal of the game, and his confidence exploded. In the third period, Kane was flying all over the ice and was pulling the trigger regularly. He led the Hawks with seven shots on net in the game.

For the Hawks, getting strong contributions from Kane, Hossa and Jonathan Toews was desperately needed to emerge from Los Angeles one win away from the Stanley Cup Final. And they got that effort on Thursday night. Toews was plus-two in the game while winning seven of 18 faceoffs.

After the Kings’ Slava Voynov put LA on the board early with his sixth goal of the postseason, Bryan Bickell answered with his eighth playoff goal. The assists on Bickell’s goal went to Hjalmarsson and Michael Frolik, who continued his hard work killing penalties.

In the game, the Blackhawks allowed only one shot during three Kings’ powerplay opportunities. Marcus Kruger led Chicago forwards with 3:41 of short-handed ice time, while Frolik added 2:49 (he was in the box for the third penalty kill). Frolik was credited with two blocked shots in the game, while Kruger blocked one.

Corey Crawford stopped 19 of 21 shots, many of which came in traffic early in the game; nearly half of the Kings shots (ten) came in the first period, but Crawford held the net well. His counterpart, Jonathan Quick, allowed three goals against 28 shots.

The Hawks will try to clinch the Western Conference at home on Saturday night.