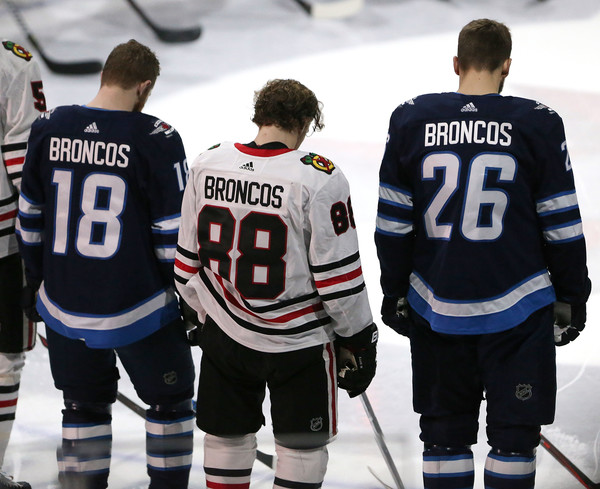 The Blackhawks got their tails whipped in Winnipeg on Saturday night, bringing the 2017-18 regular season to a close.

Both teams wore BRONCOS on the backs of their sweaters instead of names to honor the Humboldt team that was struck with unimaginable tragedy on Friday night.

Brent Seabrook scored the only goal in the 4-1 loss; the Hawks were already down 4-0 when his shot from the point got through.

Without Jonathan Toews, the Hawks won 21 of 54 faceoffs as a team. Andrew Copp scored twice for Winnipeg. Kyle Connor finished his marvelous rookie season with his 31st goal, and Dustin Byfuglien started the game with a power play goal, his eighth of the year.

Patrick Sharp’s career ended with a team-leading six shots on net in 15 minutes of ice time. 79 thoughts on “Blackhawks End Season With A Loss”