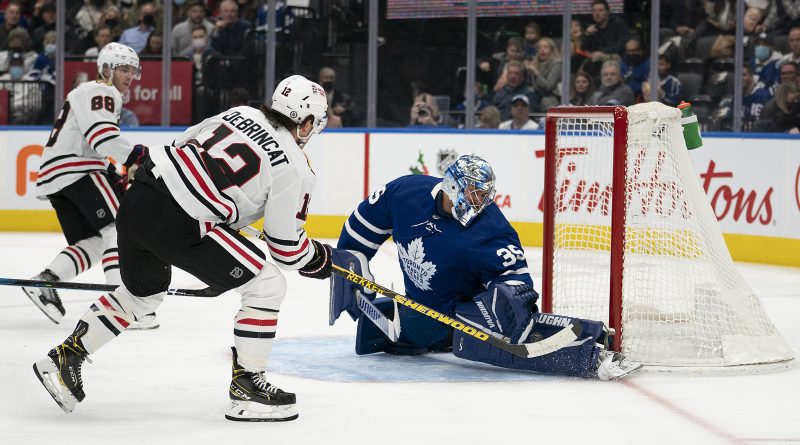 After shutting out the Habs in Montreal, the Blackhawks moved on to Toronto and a completely different challenge. The Leafs are the polar opposite of the Canadiens: they’re likely to be among the top seeds in the Eastern Conference playoffs, and their offense is scary.

Chicago opted to go with Kevin Lankinen in net and inserted Dylan Strome back into the lineup in place of a sick Henrik Borgstrom.

Toronto went with Petr Mrazek in net. This would be only his third game of the season and first since Oct. 30. In theory, the Blackhawks should have a few opportunities against an untested netminder.

So when Jonathan Toews sniped home his second goal in as many games, things felt pretty good for the visitors.

Connor Murphy and Reese Johnson picked up the assists.

Unfortunately for the Blackhawks, when the dust settled at the end of the first period the scoreboard showed a 3-1 score in favor of the Maple Leafs. After picking up an assist on Toews’ goal, Johnson went to the box and John Tavares beat Lankinen to tie the game. Tavares then set up William Nylander almost seven minutes later to give the Leafs the lead.

And then Riley Stillman made us wonder if he bet the over.

He was called for a questionable penalty behind the net and served his two minutes. At the conclusion of that penalty, he left the box, skated to the other side of the ice and tripped Alexander Kerfoot. The Blackhawks couldn’t keep the high-powered Leafs power play off the board for almost four straight minutes. Auston Matthews scored Toronto’s second PPG of the period to make the score 3-1.

The Hawks actually out-shot the Leafs 12-11 in the first period but the defensive effort at times left a lot to be desired and their willingness to go to the box was unfortunate. Overall, the first period felt like the Hawks were just getting out-classed by a legit team.

When Toronto made the score 4-1 on a weak goal from Pierre Engvall at 3:25 into the second, it felt like this game was going to get away from them.

However, the 15 minutes that followed the Engvall goal were dominated by the Blackhawks. After a power play limped to a close, Brandon Hagel won the puck and got it to Murphy who unloaded a shot that found the back of the net.

The Blackhawks didn’t score again in the second, largely because Mrazek was playing a terrific game. He stoned a few great looks for the Blackhawks to keep the lead at two. However, the Hawks out-shot the Leafs 14-3 in the period.

Early in the third period, Jake Muzzin hit Johnson high and sent him flying. Johnson went to the bench and, eventually, the room. After the big hit, however, the Hawks were able to get a change and attack. Philipp Kurashev made a nice play to keep the puck and found Dominik Kubalik who cut the lead to just one.

Kubalik’s fifth of the year came less than two minutes into the third period. All three of the Hawks’ goals came at 5-on-5, making this the first game since Nov. 1 that the Blackhawks had done that and just the fourth time all season they’ve scored three at even, full strength.

Toronto turned their offense back on but the Hawks kept the pressure on. And ten minutes into the third, the Blackhawks tied the game.

Jake McCabe’s second of the season came off assists from Ryan Carpenter and Stillman. Once again, the Blackhawks had traffic around the netminder and it paid off.

After losing to the Leafs in Chicago when the Hawks had a two-goal lead after one period, Chicago had erased a three-goal deficit. And Lankinen, after allowing a couple soft goals, was playing much better.

Unfortunately, Lankinen lost his net chasing a dump-in that took a bad bounce and found a wide open David Kampf right in front of the net with 80 seconds left in regulation. The former Hawks forward didn’t miss the empty cage and Toronto had a 5-4 lead.

That brutal last goal cost the Blackhawks a point and a chance to earn a second one in overtime. Toronto held on in the final minute and won the game in spite of their defense.

This was a game the Blackhawks should be able to take a lot away from.

Murphy and McCabe had one goal and one assist each. Murphy led the Hawks with six hits and four blocked shots; McCabe picked up four hits and two blocked shots.

DeBrincat (7) and Kane (5) combined for 12 shots on net in the game but neither scored. Kurashev played one of his better games of the season and Kubalik finally got back into the scoring column.

Lankinen has had better nights. He stopped only 21 of 26 in the loss. The Blackhawks put 35 shots on net.