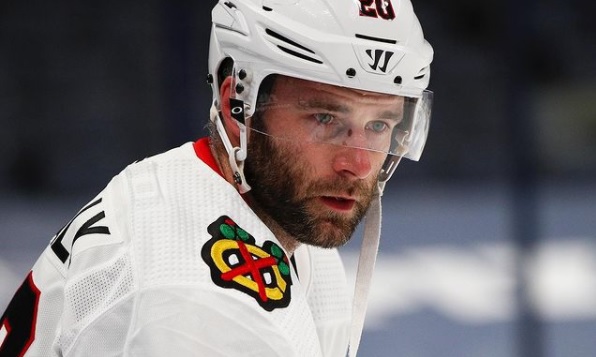 The Blue Jackets sold at the trade deadline. The Blackhawks tweaked. Chicago still has postseason aspirations and Monday’s game was as close to a must-win as you can get. Short lineup or not, the Blackhawks needed this one.

The Blackhawks took the ice without forwards Mattias Janmark and Carl Soderberg, who were traded earlier in the day. They were also without defenseman Nikita Zadorov, who wasn’t traded but was scratched. In their places were recently acquired forward Brett Connolly and defenseman Riley Stillman, both of whom came over last week in a trade with the Florida Panthers.

Columbus was playing without a full deck of their own, after a series of deals took a few of their key players – including captain Nick Foligno – out of town. So both teams were still sorting out their lines when the game started.

Adam Boqvist took a deflected puck to the face less than five minutes into the game and went straight to the room. He did not return to the ice in the first period, skating only 42 seconds. His injury put more pressure on Stillman to integrate into the lineup. He skated 7:19 in the first period and was credited with one blocked shot and a team-high two hits in the opening 20 minutes.

It took 14 minutes for either team to get on the board, and it was Columbus who scored first. Stefan Matteau scored his first goal of the season to break the ice. (As an aside, we’re always disappointed with Stefan scores and Pat Foley doesn’t take advantage of the opportunity to scream his last name three times.)

Scott Harrington went to the box 69 seconds after the Matteau goal to give the Blackhawks a power play. Chicago took advantage, as a blast from Duncan Keith worked its way through traffic and into the net to tie the game.

Alex DeBrincat and Patrick Kane were credited with the assists on Keith’s second goal of the year.

Those would be the only two goals of the opening 20 minutes. Columbus out-shot the Hawks 13-10 in the period. For his part, Connolly skated six shifts (4:14) in his first period with the team. Columbus won 65 percent of the faceoffs in the first period.

Boqvist was ruled out for the rest of the game as the second period began.

Columbus came out with significantly better energy to open the second period. Lankinen made a few impressive saves in the opening couple minutes but Patrik Laine gave the Jackets a 2-1 lead six minutes into the second.

It was going about this well in the second period for the Hawks:

With two minutes left in the second period, Max Domi completely lost his mind. He held Connor Murphy and an official’s arm went up for a penalty. Domi then broke his stick slashing Murphy. He then challenged Murphy, who politely declined because the Hawks were going to get a power play out of Domi’s initial stupidity. That didn’t sit well with Domi, who then dropped his gloves, threw Murphy to the ice and threw a couple punches while Murphy clearly made zero effort to fight back.

To be absolutely clear: Max Domi should be suspended for his actions.

Domi was assessed two minutes for hooking, two more for cross-checking and also received a ten for misconduct. Chicago went to the powerplay with 1:51 left in a second period that saw them generate almost no offense whatsoever.

Even though they had done next to nothing offensively in the period and failed to score before the end of the second, Chicago out-shot Columbus 9-7 in the period. The Hawks would carryover 2:09 of power play time into the third period, still chasing one goal.

Connolly got a couple shifts with David Kampf and Kane late in the second period. He skated 8:37 with one hit in the first two periods. Stillman had two shots on net, two blocked shots and three hits in 13:14 through 40 minutes.

The Blackhawks did nothing on the 4-minute powerplay but did have some offensive momentum for the first time since their goal in the first period. Six minutes into the third Kane found Philipp Kurashev who scored his eighth of the season to tie the game at two.

That momentum continued. Connolly put a shot on net two minutes after the Kurashev goal that somehow found its way into the net to give the Blackhawks a 3-2 lead.

Unfortunately, one of the incredibly skilled players still in Columbus has absolutely killed the Blackhawks at times. Laine took a puck coast-to-coast and made a marvelous move to beat Lankinen and tie the game. Chicago’s lead lasted 3:11.

With 2:11 left in regulation, Jack Roslovic had a terrific scoring chance that was robbed by Lankinen. After the Laine goal the Hawks were on their heels and chasing too much.

Neither team scored in the final eight minutes and we headed to overtime. Remember the faceoffs stat at the end of the first period? After 60 minutes, the Blackhawks had won 57 percent of the faceoffs in the game – a huge improvement across the board in the final 40 minutes.

Kampf won the faceoff to open overtime. He stayed on with Kane and Keith for an extended period before giving way to DeBrincat. Chicago’s second defenseman on the ice was Wyatt Kalynuk. He was on the ice with Kirby Dach and Brandon Hagel when Hagel ripped home the game-winning goal.

Chicago needed two points and got them behind contributions from youngsters, a new face (Connolly) and the netminder who has carried them all year, Lankinen.

Stillman skated 21:23 in regulation with two shots, two blocks and a team-leading four hits. Connolly skated 13:05 with two shots, one block, one hit and his third goal of the season to give the Hawks a brief lead.

Patrick Kane finishes the season series with 12 points in six games against the Blue Jackets. He had two assists and ten (10) shots on goal in 23:38 on Monday night.

With Boqvist out after his second shift, Keith skated 29:48 in the game. He was credited with four shots on net, three more shot attempts that were off the mark, one block and one hit.