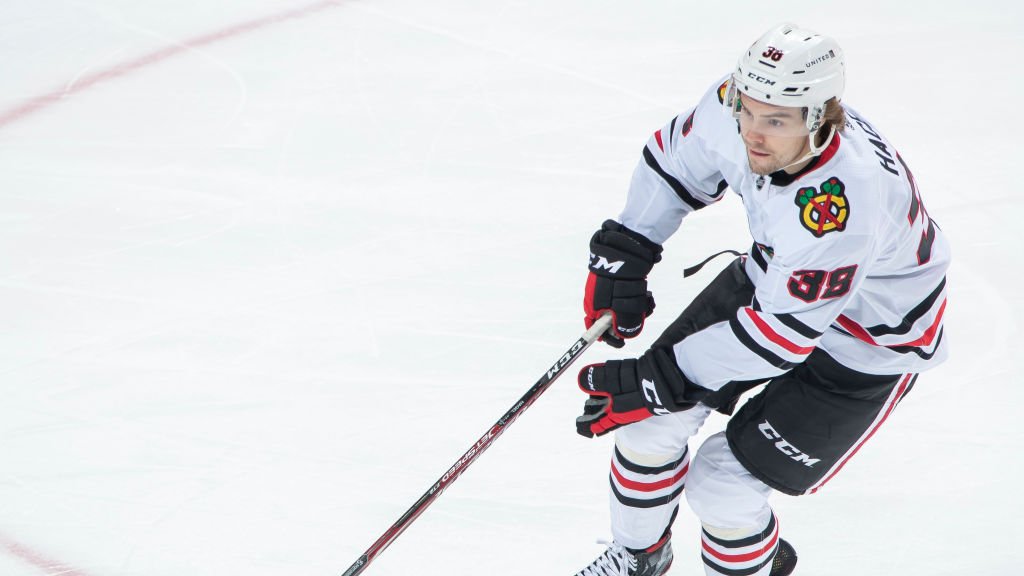 After having their Saturday game in Carolina postponed by the NHL, the Chicago Blackhawks had a long three-day weekend on the road. The Hawks were without Dylan Strome, who is still in concussion protocol. And, with Connor Murphy returning, the Hawks opted to sit Nicolas Beaudin as well.

Returning to the ice in Columbus against a Jackets team chasing them in the playoff race, how would Chicago look in the first period?

The Jackets got a couple early chances but the Blackhawks quickly shut it down and went to work. When the Hawks got a power play 7:19 into the game they made it count. Carl Soderberg worked hard in front of the net to tap in a gritty goal to give the Hawks a 1-0 lead.

The Jackets were struggling in almost every aspect of the game and the Blackhawks were keeping their foot on the pedal. A Max Domi turnover 10 minutes into the second found the stick of Patrick Kane and Chicago had a 2-0 lead.

The goal is the 398th career regular season goal for Kane.

Cam Atkinson cut the Blackhawks’ lead in half 91 seconds after the Kane goal but the majority of the first period was owned by the Blackhawks. Chicago out-shot Columbus 17-5 in the opening 20 minutes. However, they carried only a one-goal lead into the intermission.

Why only one goal? Joonas Korpisalo had a terrific first period in net for Columbus. Chicago could have easily scored a couple more but he was on point from the get-go.

When you dominate a period the way the Blackhawks did and only come away with a one-goal lead it can lead to trouble in the next 20 minutes. And that was precisely the reality for the Hawks in this one.

Patrik Laine tied the game 48 seconds into the middle period.

With 16:24 left in the second, Ian Mitchell broke up a breakaway opportunity for Oliver Bjorkstrand but did so illegally. Bjorkstrand got a penalty shot opportunity but Kevin Lankinen made a terrific save.

At 5:46 into the second it appeared that another Columbus turnover had turned into a goal, this time for David Kampf. But Matthew Highmore made contact with Korpisalo, not only taking the goal off the board but also sending Highmore to the penalty box.

Chicago handled the penalty quickly turned the kill into an opportunity. Soderberg and Kane provided traffic around the net and Kane set up Brandon Hagel for his first career NHL goal.

Unfortunately, Adam Boqvist went to the penalty box 12 seconds after Hagel gave the Hawks the lead. And Laine sniped home his second power play goal of the night to tie the game at three.

The Blackhawks’ penalty kill being atrocious was a theme. Unfortunately the parade to the box wasn’t finished.

At 15:05 into the second the Blackhawks took the lead back. Dominik Kubalik was the scorer this time.

That’s where the score would stand at the second break. Columbus out-shot the Hawks 12-11 in the period and each team scored twice. Could the Blackhawks build on their lead – and hold onto it?

Well, Boqvist gave the Blackhawks a two-goal margin 3:37 into the third. His first of the year came on the power play, Chicago’s second goal with an advantage in the game.

Kane picked up his third assist and fourth point of the night on Boqvist’s goal.

Now the 15th four-point outing (1G, 3A) of Kane’s career. His second on the season. #Blackhawks https://t.co/FbPm27EZjx

The first time the Blackhawks had a two-goal lead it didn’t last long enough. This one didn’t, either.

Bjorkstrand scored Columbus’ third power play goal of the night exactly 10 minutes into the third period. Six minutes later Bjorkstrand tied the game, giving him six goals on the season. The game was tied, Lankinen was fighting it and the Blackhawks were struggling to clear the zone.

The Hawks would put only five shots on goal in the entire third period with Boqvist’s one getting through. Columbus scored twice on eight shots and we headed to overtime. Again.

Once the puck dropped in overtime Chicago barely touched the puck again for five minutes. For as mediocre as Lankinen was in regulation, he was terrific in the extra session. Columbus out-shot the hawks 5-1 in overtime but neither team scored.

Alex DeBrincat scored to open the shootout for the Hawks and Lankinen made two saves before Jack Roslovic fumbled the puck to give Chicago the victory.

In five games against Columbus this season, Kane now has 12 points and is plus-six. He has absolutely dominated the Jackets this year.

Kane has six multi-point efforts in 10 games and has accounted for five goals and 15 assists in the month of February. Importantly, 14 of his 20 points in the month have come at even strength.

Lankinen stopped 25 of 30 in one of his weakest performances of the season. But he came up big in OT and the shootout when the Hawks needed him and the team got the second point.

Boqvist, Duncan Keith and Nikita Zadorov were credited with four shots on net each from the Hawks’ blue line. Ian Mitchell was held to 12:15, the lowest ice time by far among Blackhawks defensemen.

Kubalik led Chicago with six shots on net. He was credited with an assist and his sixth goal of the season.

Soderberg had one goal, two assists and won 11 of 17 faceoffs in another strong performance.