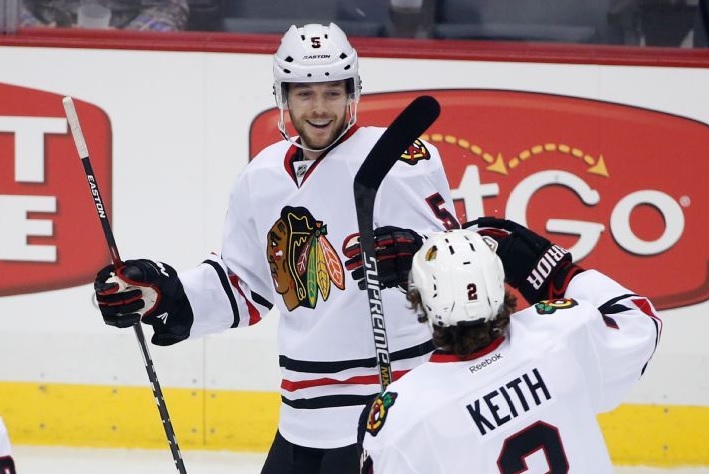 David Rundblad scored for a second straight night, but it took 65 minutes and a couple rounds of a shootout for the Blackhawks to subdue Sidney Crosby and the Pittsburgh Penguins. Rundblad opened the scoring in a first period that was dominated by the Blackhawks, but ended with Chicago only leading by one. Marian Hossa and Jonathan Toews picked up the assists on Rundblad’s third of the season and second inside 24 hours.

The line of Hossa, Toews and Brandon Saad was buzzing once again. Saad was credited with a game-high seven shots on net; only two other players in the game were credited with as many as four. He was also credited with three missed shots and three hits in a busy night for Chicago’s top unit.

Toews put three shots on net, was credited with one assist and two hits and won 15 of 22 faceoffs.

Hossa scored his tenth of the season on a Blackhawks power play early in the second to extend the Chicago lead to two. But after that goal – scored at 2:41 into the second period – the Hawks offense was held in check by a Pittsburgh team that was down two key players.

Kris Letang was an expected absence after getting hammered by Zac Rinaldo on Tuesday night, but when Evgeni Malkin was scratched after warm-ups the already-depleted Penguins were looking at a shorter bench than they had anticipated.

The Pens battled back to tie the game in the second period, though. For the second straight night, the Hawks allowed a player to score his first career NHL goal; Zach Sill scored 2:40 after Hossa’s goal to cut the lead in half. Steve Downie tied the game at 12:22, and that would complete the scoring for the night.

Each team had chances in the third period, but neither side was able to convert. The story was the same in overtime, and the game went to the skills competition where Toews and Patrick Kane embarrassed Marc-Andre Fleury and Corey Crawford was able to stop both David Perron and Sidney Crosby easily to secure the victory.

Headed to his first All-Star Game, Brent Seabrook played a fantastic game. He skated 24:50 and was credited with a team-leading four blocked shots and three hits while picking up an assist on Hossa’s goal.

Five Blackhawks will now travel to this weekend’s All-Star Game, but fans will have to wait a full week to see the team back on the ice together when the Hawks take on the Kings in LA next Wednesday night.