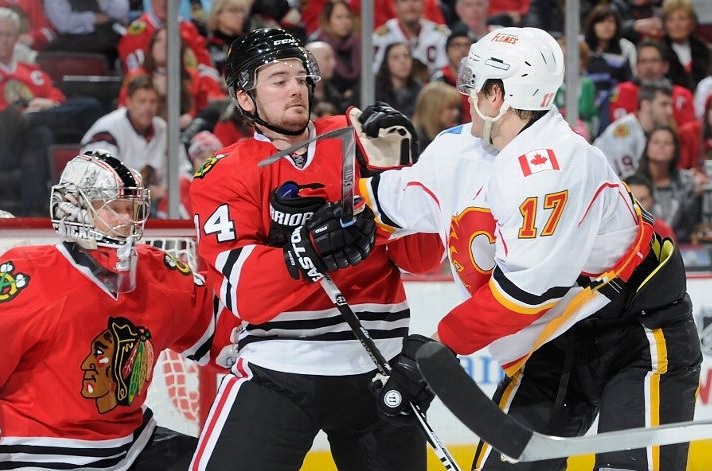 The Blackhawks returned home after a mediocre effort against the Islanders on Saturday night and faced a well rested Flames team. But a strong possession game, especially in the second and third periods, got the Hawks back on the winning side of the ledger. Antti Raanta returned to the net and made 23 saves in the victory. With news that Corey Crawford is expected back soon, the organization will make a decision on which netminder heads to Rockford soon.

Jiri Hudler opened the scoring against Raanta at 4:27 into the second period, but that was the sum of the Calgary offense. The Flames outshot the Hawks 9-7 in the first period, but Chicago dominated the puck over the final 40 minutes – a return to the style of hockey that has been highlighted throughout the recent win streak but was absent on Long Island the night before.

It took only nine seconds for the Hawks to cash in on their first power play of the night. Crisp passing from Patrick Kane to Jonathan Toews to Patrick Sharp ended with Sharp’s fourth goal of the season and a tied game.

The game would stay tied for 25 minutes, until the Hawks picked on “Johnny Hockey.” Johnny Gaudreau had his pocket picked by Niklas Hjalmarsson, who got the puck to Toews. A pretty pass up the ice to a streaking Brandon Saad ended with the game-winner behind Jonas Hiller and put the cap on a fantastic night for Saad.

Coach Joel Quenneville spread out the ice time among his forwards in the second half of a back-to-back, with Toews skating only 16:24 but still winning 10 of 18 faceoffs and picking up two assists. Kris Versteeg led the Hawks with seven shots on net in 15:37, and also was credited with one takeaway. Kane led Chicago forwards in ice time, but only skated 17:30 in the game.

Daniel Carcillo was the only skater to finish under 10 minutes of ice time in the game. Bryan Bickell saw his ice time increased to over 13 minutes again, and he responded with a more physical game including a team-high three hits in the game. Bickell’s ice time has increased since Sharp returned from injury and joined him on a line with Andrew Shaw.