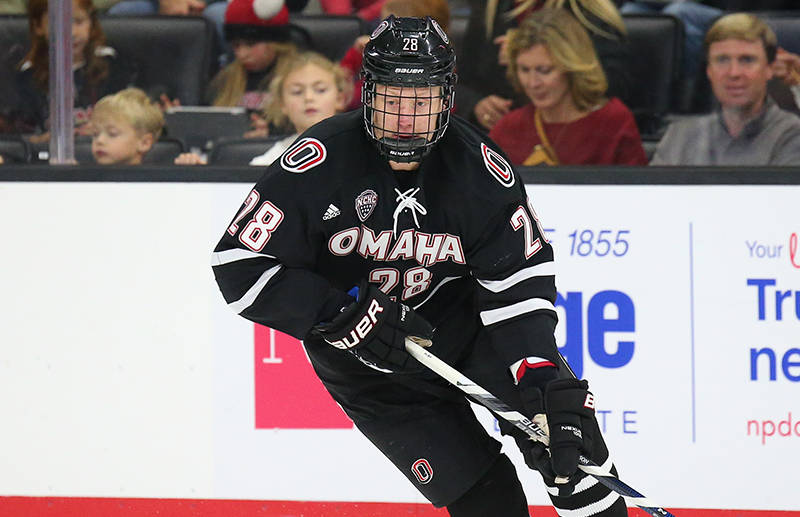 Over the last week, the Blackhawks hosted their annual prospect camp. As has been the case since Stan Bowman took over as the Hawks’ GM, there was a strong group of college players involved.

In the past the camp was heavily influenced by Hockey East or the Big Ten. This year, there was a distinct NCHC flavor to the camp.

Two prominent NCHC players won’t be returning to the conference this year. North Dakota’s Nick Schmaltz and Luke Johnson signed with the Hawks this summer after winning a national championship. But North Dakota isn’t the only school in the conference, and the Hawks camp had representation from a number of schools.

Blackhawks draft picks Fredrik Olofsson and Luc Snuggerud are both at Nebraska-Omaha, and the new program got a lot of attention from the Chicago media this week. CSN Chicago’s Tracey Myers featured the two on Wednesday and Mark Lazerus at the Sun-Times also included a note about the new Omaha program as well.

From the Sun-Times article:

“It’s getting pretty big out there,” Olofsson said. “When you think Nebraska-Omaha, you don’t think too much hockey, but we’re on the rise. We actually just got brand-new, pro-type facilities, too. It’s sold out each night.”

The facilities at Omaha are impressive. The Baxter Arena opened on October 23, 2015 and seats nearly 8,000 – the second-largest capacity in the conference (North Dakota’s Ralh Englestad Arena seats 11,640). Omaha advanced to the Frozen Four for the first time in 2015.

Olofsson and Snuggerud were joined by teammate Jake Randolph as a free agent at the Hawks camp this week.

But they weren’t the only three players from the NCHC.

Matheson Iacopelli, a 2014 draft pick, plays at Western Michigan and was on Team B this week.

Two free agent defensemen who played on Team B at the prospect camp are also from the NCHC. Neal Pionk from Minnesota-Duluth and Jimmy Schuldt from St. Cloud State had a nice week.

Team C, which was primarily the more pro-ready prospects, included Johnson and Schmaltz. Anthony Louis, who is headed back to Miami (Ohio) this season, was also on that roster.

With such a long list of players coming from one conference, it’s clear the Blackhawks’ front office has their eyes on the NCHC.

9 thoughts on “Blackhawks Eyes On The NCHC”