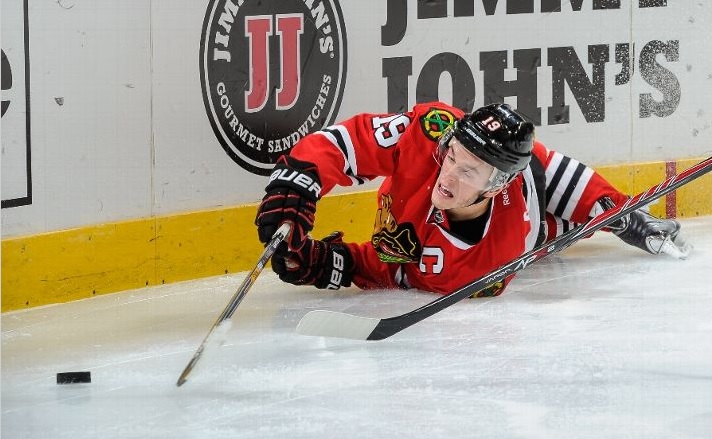 The latest Vezina-caliber effort against the Chicago Blackhawks came from Michael Hutchinson, who earned his first career shutout at the United Center on Sunday night. It took only 20 seconds for the Winnipeg Jets to produce enough offense to win a divisional game, as Michael Frolik scored against his former teammates on the first shift of the game. That goal would hold up as the game-winner as Hutchinson and his shot-blocking teammates frustrated the Blackhawks all night.

Winnipeg was credited with 30 blocked shots in the game, led by five from Mark Stuart. Hutchinson stopped 33 shots, 13 of which came in the third period.

Corey Crawford returned to the net for a second consecutive night and was sharp after allowing the early score. He made 26 saves but took the loss.

The Blackhawks have lost five of their last seven games, and have dropped their last two home games by identical 1-0 scores. Chicago out-shot Anaheim and Winnipeg 71-52 in those two games.

Jonathan Toews led Blackhawks forwards with 22:41 in ice time, winning 15 of 24 faceoffs and picking up three hits and three takeaways in the game. Patrick Sharp led the Hawks with seven shots on net in 21:19 and was also credited with one hit and two takeaways.

One night after taking a puck to the face, Niklas Hjalmarsson was back on the ice for 22:18 and was credited with one blocked shot and a team-high four takeaways in the game. Duncan Keith led the Hawks with 24:25 on the ice in the loss; Trevor vanRiemsdyk skated 14:38 and looked strong once again while being paired with David Rundblad for much of the evening.

Jeremy Morin managed to put three shots on net in only 10 shifts (7:39), and wasn’t the Hawks lowest ice time recipient in the game. That distinction belonged to Bryan Bickell, who was on the ice for only 7:21 and did nothing in his 10 shifts.

Looking ahead, the schedule presents a tough upcoming 10 days for the Hawks. Chicago visits Montreal on Tuesday before hosting Washington (Friday), San Jose (Sunday) and Tampa Bay (Tuesday). Through 12 games, the Blackhawks have now managed to score only 29 goals – not good enough. 73 thoughts on “Blackhawks Fail To Finish Against Jets”