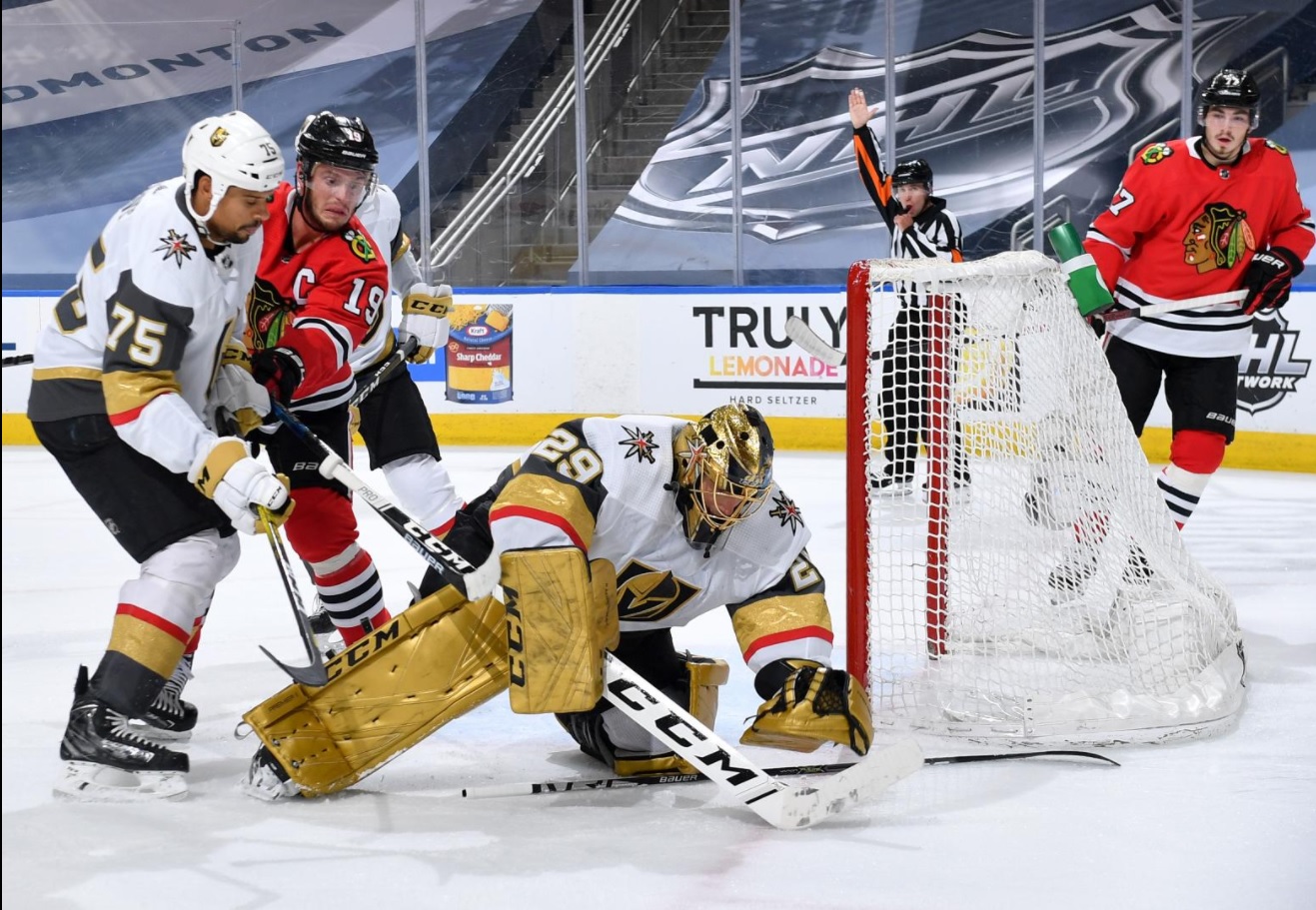 After Saturday night’s game, Jonathan Toews and Alex DeBrincat talked about not being frustrated. The Chicago Blackhawks fought hard against a deeper Vegas team but came up short, again. This time, the Blackhawks managed just one goal – and lost by one.

Are there positives the Blackhawks can take away from Game Three? Maybe. DeBrincat was clearly committed to getting the puck on net and it showed; he was credited with a team-high eight shots on net in 17:32. As a team, the Blackhawks out-shot the Golden Knights in the game.

But Marc-Andre Fleury, getting the start in place of Robin Lehner, looked like the Cup-winning netminder Pittsburgh fans loved for so many years. Yes, he allowed a soft goal to Olli Maatta in the third period, but the rest of the night belonged to Fleury. He was terrific, stopping 26 of 27.

Corey Crawford held up his end of the bargain. He made 24 saves and came up big a few times to keep his team in the game.

But the offense just couldn’t find the holes in Vegas’ defense and finish.

So where did the Hawks fall short?

Surprise! The power play left a lot to be desired. Again. After complaining about not getting enough advantages in the first two games (rightfully), Chicago had four opportunities to score with an extra skater on Saturday. They failed on all four.

Three of those power plays came in the first period (the third carrying over into the second). Reilly Smith went to the box less than four minutes into the game and again with 19 seconds remaining in the opening frame. Chicago couldn’t convert.

The other issue is one we’ve seen throughout these playoffs, but will hopefully be a footnote at the end of strong career. Adam Boqvist got pushed around and struggled again on Saturday, perhaps the most obvious issue came on Vegas’ second (and, ultimately, the game-winning) goal.

The kid has a lot of skill and a ton of potential, but he’s getting it handed to him by Vegas in this series. He was a scratch for Game Two. These are hard lessons, but good ones for a young player the organization is high on.

Kirby Dach did not lead all Blackhawks forwards in ice time in this one. But his 19:43 on the ice was 17 seconds more than Toews got. Dach put four shots on net, blocked one shot and was credited with two hits in another good performance.

For as much as Boqvist has looked like a young rookie, Dach continues to impress.

Chicago is building a strong list of needed improvements for the general manager to consider when the offseason begins, and most of them are up front. When Alex Nylander fails to put a shot on net in 10 minutes and Matthew Highmore is limited to less than six minutes on the ice, your depth becomes an obvious handicap.

Game Four – a potential elimination game for the Blackhawks – is on Sunday afternoon. The Hawks have shown a great deal of grit and determination in this series, but they’re fighting an uphill battle against a better, deeper team. Chicago will look to extend the series to at least a fifth game with continued pressure and hopefully a few more fortunate bounces of the puck.