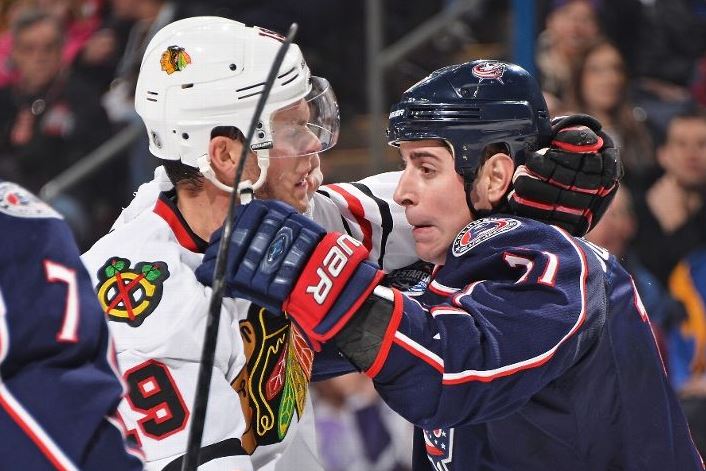 Led by a phenomenal Sergei Bobrovsky, the Columbus Blue Jackets ended their long losing streak to the Chicago Blackhawks with a shootout victory on Saturday night. After being off since Tuesday, the Hawks came out firing but couldn’t solve Bobrovsky. Chicago out-shot Columbus 15-3 in the first period, but Jack Skille was able to tip a puck past Corey Crawford to get the Jackets on the board. On the play, Tim Erixon (recently acquired from Columbus) and Skille went into the boards in a heap, but Skille was able to beat Erixon up and back into the play. He got to the doorstep in time to redirect a shot past Crawford to get on the board.

Chicago kept shooting in the second, and finally beat Bobrovsky. Patrick Sharp scored his first even strength goal of the season to tie the game.

The second period also included a rare near-fight from Jonathan Toews, who got whacked in his man area a couple times by Brandon Dubinsky and finally had enough. The two wrestled and Toews threw a couple punches, but the refs stepped in before things escalated too far. Thankfully, Toews didn’t do any damage to his hands punching Dubinsky, who wears a shield.

With Toews and Dubinsky in the box for offsetting double-minors, Brad Richards took a high-sticking penalty with only four seconds left in the second period.

Chicago opened the third with one of the best penalty killers in the game in the box and 1:56 to kill, but were only able to successfully take care of 1:55 of the penalty. Kevin Connauton blew a shot past Crawford, who never saw it, and gave the Jackets the lead early in the final frame.

Almost seven minutes later, an odd sequence ended with the game tied. Bobrovsky left a rebound in front of the net, so a stickless Marcus Kruger used the base stealing method to crash the net. The sliding Kruger didn’t put the puck in the net, but Ben Smith was on the spot and tapped it in to tie the game. The play was reviewed by Toronto and the goal was awarded to Smith, who has been a bigger offensive contributor over the last couple weeks.

Unfortunately, 65 minutes weren’t enough for the Hawks and Jackets to finish the deal. It was a fantastic, entertaining game that saw Bobrovsky make 39 saves to 17 for Crawford before heading to a shootout. It took nine rounds for the outcome to be determined, and it was defenseman Jack Johnson who accounted for the final score of the evening.

Brent Seabrook had a marvelous game, breaking up at least three rushes by sprawling on the ice. He was credited with only two blocked shots and two takeaways in the game, but played arguably his best game of the season.

As good as Seabrook was, Brandon Saad was fighting it all night. He had a number of quality scoring opportunities bounce off his stick or go wide, and wasn’t able to pull the trigger on a couple opportunities to hit an open teammate for a potential scoring chance as well.

The Hawks return to the United Center for an early 6 pm CT start against Toronto on Sunday.