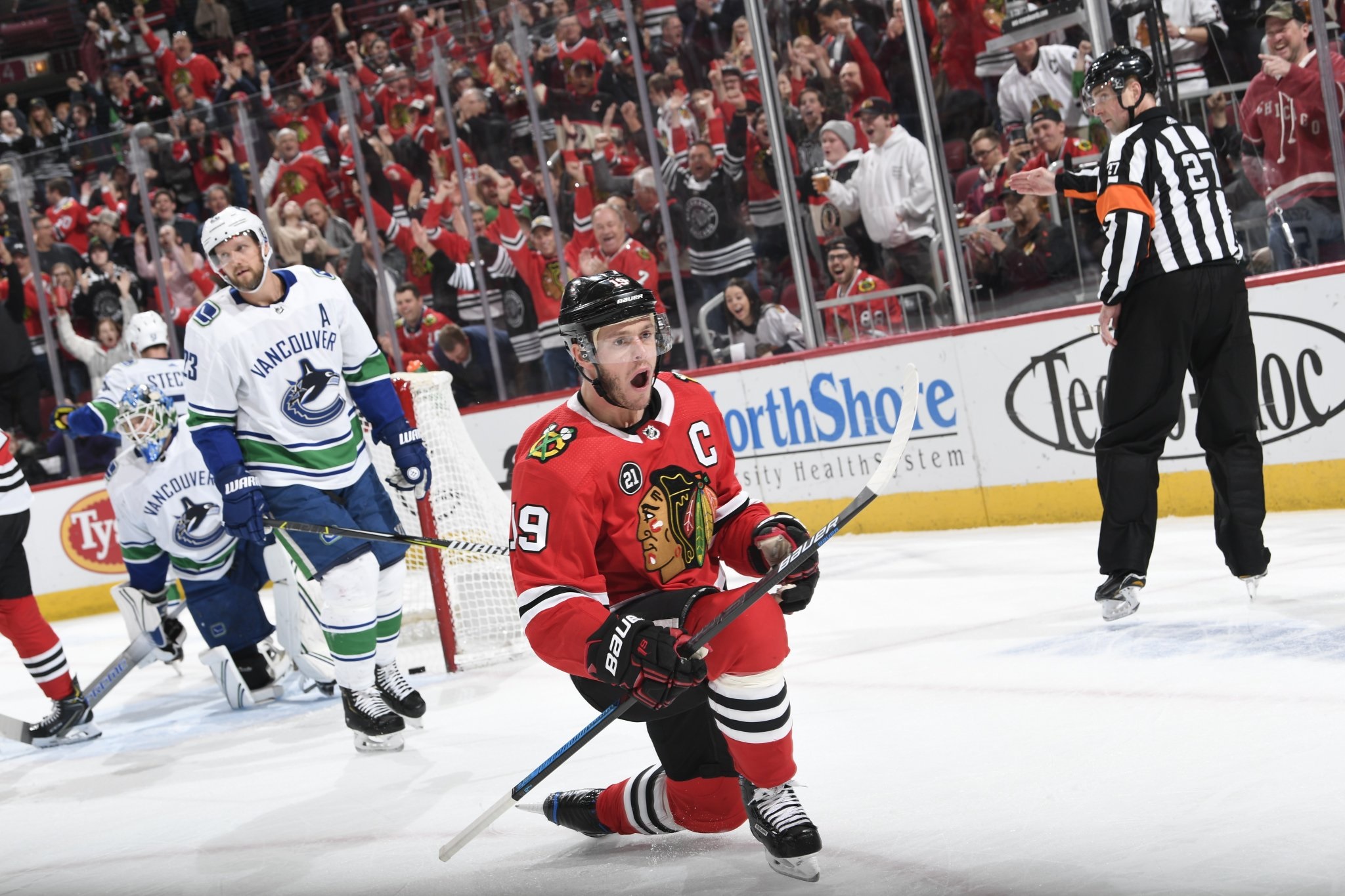 If the Blackhawks are indeed sincere in their efforts to make the playoffs, Monday night was a game they had to win.

At the end of the second period of the Hawks game against the Canucks, the Tampa Bay Lightning clinched the Presidents’ Trophy with a regulation victory over the Arizona Coyotes. That Arizona loss opened the door for the Hawks to inch closer to the eighth spot in the conference.

But would the Hawks take advantage?

Corey Crawford, coming off one of the best regular season performances of his career, remained strong in the first period. Neither side generated much offensively in the first period, but the Hawks got a late power play. Patrick Kane fired a shot at the net and Jonathan Toews redirected it home for his 31st of the season.

The assist gave Kane 100 points on the season, putting him in incredible company in Blackhawks history.

The goal game with 35 seconds left in the first period. Vancouver out-shot Chicago 11-10 in the first period but the Blackhawks took a 1-0 lead to the room. Dylan Sikura had a strong opening 20 minutes, but couldn’t convert a couple great scoring opportunities.

Chicago’s offense never game out for the second period.

Marcus Kruger took a terrible penalty 49 seconds into the second and the Canucks converted immediately. Alex Edler’s eighth of the season tied the game at one just 53 seconds into the middle period.

And, the way Chicago skated over the final 13 minutes of the period, a second goal appeared to be enough. In the closing 20 seconds of the period the Hawks entered the offensive zone but opted to pass the puck around for the remainder of a period rather than shoot it. The effort earned boos from the faithful in the seats at the United Center.

The Canucks out-shot the Blackhawks 11-4 in the period.

Teams that are truly invested in chasing the postseason cannot be limited to four shots in 20 minutes against a bad team.

It took nine minutes for the Hawks to generate a solid offensive press in the third period, but the line that got them going was Alex DeBrincat, Dylan Strome and Brendan Perlini.

Koekkoek made a nice play to stand up Brock Boeser with six minutes left in regulation. Boeser didn’t appreciate it and held onto Koekkoek’s stick long enough that a penalty could have been called on Tuesday afternoon. Eventually the whistle did come, however, and the Hawks got an important power play.

Thatcher Demko made a couple nice saves and the Blackhawks wasted the advantage. Immediately after Boeser left the box the Canucks got an odd-man rush but Crawford made a huge save to keep the game 2-1.

Right off a Toews faceoff win with 3:16 left in the third Erik Gustafsson loaded up and let fly. Demko didn’t see it at all with Edler standing right in front of him and the game was suddenly tied at two.

Crawford made a couple huge saves late to keep the game tied but the Hawks couldn’t get another shot through. The Hawks out-shot the Canucks 17-11 in the third period. Regulation ended with the Canucks holding a 33-31 shot advantage but important numbers on the scoreboard remained locked at two.

It took 16 seconds for Vancouver to win the game in overtime. Bo Horvat took care of the game-winner and the Hawks wasted an opportunity to move up more than one point in the standings.

Gustafsson led the Blackhawks with seven shots on net. He led all Chicago skaters with 27:10 on the ice. The only other Hawks defenseman over 18 minutes was Duncan Keith (24:05).

43 thoughts on “Blackhawks Fall To Canucks In Overtime”