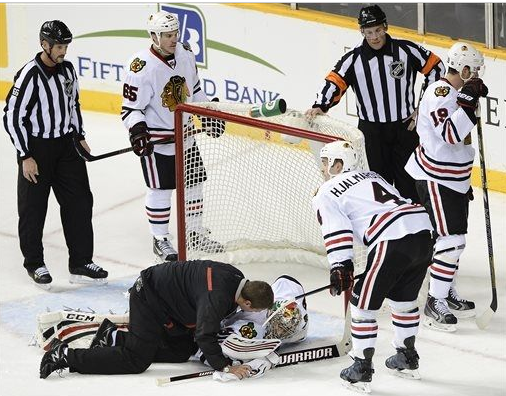 The Blackhawks played in Nashville on Saturday night.

And got whipped by a struggling Preds team.

Marian Hossa was a late scratch with a lower body injury. By sitting, Hossa avoided being part of an ugly box score.

Nikolai Khabibulin got the start in net, but had to leave the game late in the first period after suffering a lower body injury. In the first 15:23, he allowed two goals against only eight shots, and didn’t look great on either.

After the game, coach Joel Quenneville said “it could be a bit” when asked about Khabibulin’s injury. He would not commit to calling up Antti Raanta, however.

Corey Crawford entered the game, but his numbers were actually worse than Khabibulin’s at the end of the night. Crawford allowed five goals against 22 shots.

Nashville’s power play scored twice in five opportunities. Chicago failed on all four of their chances with the mad advantage.

At the dot, the Hawks got destroyed. Jonathan Toews won nine of 21 and Marcus Kruger won seven of 12. Andrew Shaw and Brandon Pirri combined to win only six of 31 faceoffs.

In his return to the Blackhawks’ lineup, Kris Versteeg skated exactly 14 minutes with an assist, four shots on goal, one hit and two penalty minutes.

Seven different Predators put the puck in the net, and six Preds had a multi-point night. Rookie defenseman Seth Jones led Nashville with six blocked shots and was also credited with an assist and two hits in 20:33 in the game.

For the Blackhawks, Saturday night was only the third regulation loss in the season’s first 20 games. But it was the ugliest performance by the team to date by far.

The Hawks are back on the ice at the United Center on Sunday night, facing the San Jose Sharks.