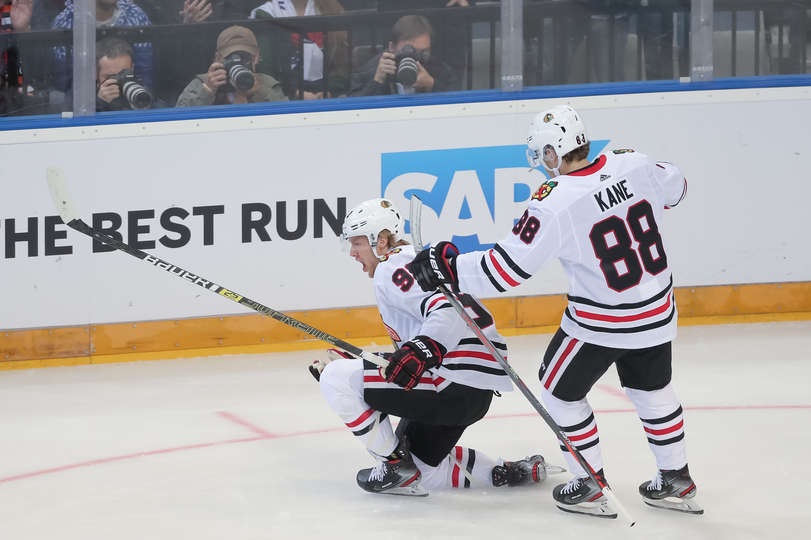 The Blackhawks started their 2019-20 season on the road – in Prague. Chicago “visited” the “host” Philadelphia Flyers for a season opening game in Europe.

Chicago’s new-look roster lined up this way to open the game:

Corey Crawford got the start to begin the new year.

Travis Konecny gave Philadelphia a 1-0 lead at 6:24 into the first period. It was one of the new faces – Nylander – who tied the game 80 seconds later.

Kane picked up the assist on Nylander’s first goal for the Blackhawks.

At the end of 20 minutes the score was tied on the scoreboard but Philly had a 13-11 shot advantage.

The second period was dominated by the Flyers. Oskar Lindblom scored a power play goal at 6:28 and then Konecny scored a highlight reel goal at 18:04 to give the Flyers w 3-1 lead.

But the Hawks didn’t disappear despite being overwhelmingly outshot in the period. Kane set up DeBrincat for his first of the new year with 13 seconds left in the second period to cut the lead to one.

The goal came while the Blackhawks closed out a power play. Andrew Shaw took a crosschecking penalty but Claude Giroux bailed him out with a matching minor only 19 seconds later.

Philadelphia out-shot the Hawks 17-8 in the second period. If not for Crawford the Hawks could have been looking up at more than two when DeBrincat scored.

If that sounds painfully familiar to far too many games last season… it should.

Michael Raffl scored what would hold up as the game-winning goal at 9:48 into the third.

Kane scored his first of the season at 17:53 to get the Hawks back to within one but that would close the scoring.

Kane finished the game with three points. Gustafsson had two assists to lead the offense for Chicago.

The Flyers out-shot the Hawks 38-31 in the game. Crawford was good but faced too many shots (again, an issue the Hawks were trying to fix).

Toews won eight of 22 faceoffs in the game and was credited with three shots on net in a forward-high 21:41 on the ice. Strome won five of 11 at the dot. Carpenter won three of his six faceoffs and Kampf won four of 13.

Sean Couturier and Giroux dominated the Blackhawks at the dot. They won a combined 22 of 32 in the game.

Kane was credited with only two shots on net in 21:28 but led the team with his three points.

Kubalik, Carpenter and Gilbert led Chicago with four hits each. Kubalik was also credited with three shots on net in 13:59.

Maatta skated over 20 minutes in the game including a team-leading 3:25 on the penalty kill. He was not credited with a blocked shot in the game. Seabrook led the Hawks with three blocked shots in more than 19 minutes on the ice. Koekkoek skated only 13:43 but was the only Chicago skater to finish minus-two.

128 thoughts on “Blackhawks Fall To Flyers In Prague”