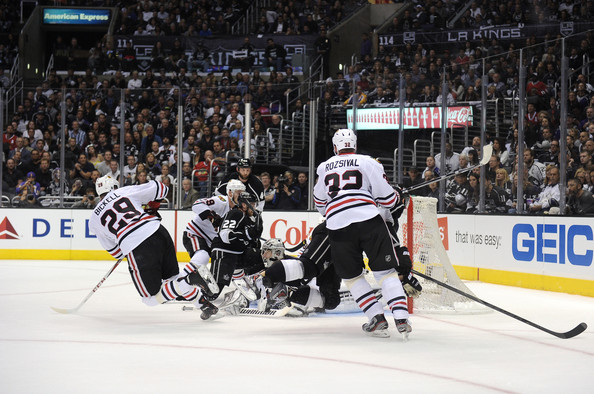 The Kings hadn’t lost on home ice in the postseason, and continued their dominance in LA with a 3-1 victory over the Blackhawks on Tuesday night.

After two solid victories in Chicago, the Blackhawks came out flat against the Kings in Game Three. Justin Williams gave LA the lead early, and the Hawks were never able to draw even.

LA coach Darryl Sutter made some significant line changes at the start of the game and they paid off. Jarret Stoll was moved up to the Kings’ top line, while Anze Kopitar was moved to the third line.

Kopitar has struggled to produce offensively in the postseason, but had a strong night in Game Three with two hits, one takeaway and won 12 of 19 faceoffs. Stoll led the King with five hits and was credited with two blocked shots in the game while winning eight of 15 draws.

Bryan Bickell scored in the final minute of the second period to bring the Hawks to within 2-1, which was fortunate for the visitors. Chicago managed only ten shots in the first 40 minutes, three of which came in the second period.

One contributing factor to the lack of shots for the Hawks was the six penalty minutes they had to kill in the middle frame, two from a Johnny Oduya interference call and a Duncan Keith double-minor for a stick that hit Jeff Carter in the chin. Carter required some repairs after the hit, and Sutter said after the game that he believed Keith deserved more than four minutes for the infraction.

Keith’s whack was the only thing that slowed Carter down in the game. Skating at center in the absence of Mike Richards, Carter was phenomenal in the game. He created a number of good scoring opportunities for teammates and gave a number of Hawks, especially Patrick Sharp, problems just trying to exit the defensive zone. In the game, Carter had two assists, two takeaways and won eight of 13 faceoffs.

Slava Voynov’s broken-stick shot slipped past Corey Crawford early in the second period and the Kings’ defenseman was credited with the game-winner. After scoring six goals in 48 regular season games, Voynov set an LA record with his fifth postseason goal for a defenseman; four of them have been game-winners.

Crawford played well again, stopping 25 of 27 shots. He was once again the Hawks’ best penalty killer as well, helping the Hawks stay close through the first two periods.

Andrew Shaw, who won eight of ten faceoffs and was credited with two hits, played well again for the Blackhawks. Michael Frolik and Brent Seabrook led the Hawks with four hits each, and Frolik led all Chicago forwards with 4:13 of short-handed ice time.

The list of underwhelming Blackhawks was long in the game, but one player that has become a ghost in the third round of these playoffs has been Dave Bolland. In Game Three, Bolland skated only 11 shifts and 7:42, both the lowest totals on the Chicago roster. He won only one of five faceoffs, and did little else to contribute in the game. Even with the Hawks being required to kill ten short-handed minutes, Bolland skated only 1:04 on penalty kill.

Also, the box score says Patrick Kane skated over 20 minutes in the game, but you wouldn’t have known it from watching. He was credited with only two shots in 24 shifts.

Jonathan Toews’ scoring drought also continued as well, but he was credited with two blocked shots and one hit in the game. He provided pressure in front of Quick on Bickell’s goal as well, but needs to find the back of the net.

Coach Joel Quenneville was pretty clear with his comments after the game. “We got out-worked today.”

Now the Blackhawks will need to respond when the two teams return to the ice in Game Four.

53 thoughts on “Blackhawks Fall In LA”