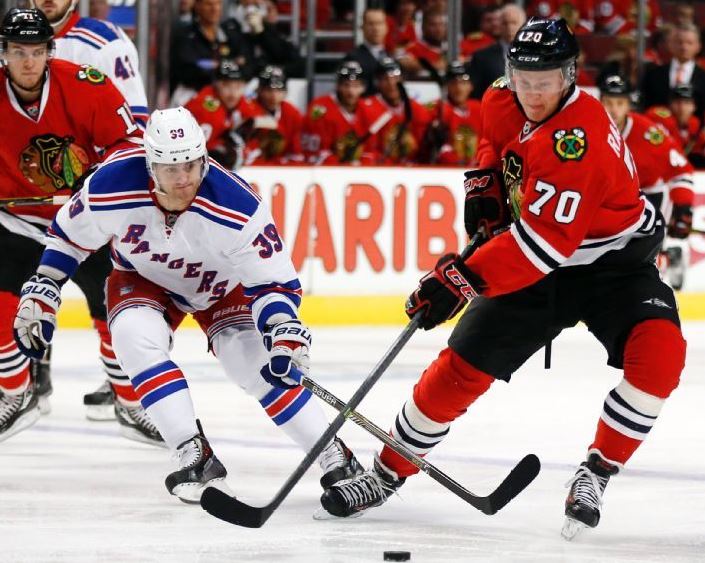 The Blackhawks lost a second preseason game in as many days, dropping a home decision to the defending Eastern Conference champion New York Rangers on Friday night. Among the NHL regulars on the night, Jonathan Toews and Brad Richards were terrible at the dot (won nine of 32 combined faceoffs). Toews was credited with two hits and one blocked shot, but was minus-two and served a minor penalty in the game. Richards was credited with three shots on net.

Brent Seabrook and Duncan Keith were the only Hawks players to skate more than 20 minutes; Niklas Hjalmarsson played exactly 19:00 in the game.

When short-handed (which the Hawks were on three occasions Friday), coach Joel Quenneville sent out Brandon Saad with Dennis Rasmussen to begin each penalty kill. Saad led all Blackhawks skaters with 2:37 of PK ice time on Friday night; Rasmussen spent 2:30 on the ice while at a disadvantage.

Rasmussen had another good night, scoring the Hawks’ one goal of the night. When the second period opened, Quenneville moved Phillip Danault off the fourth line and up to a line with Rasmussen and Jeremy Morin, and that line was very good throughout the final 40 minutes.

Danault started the game between a couple pylons in Pierre-Cedric Lebrie and Cody Bass. Both of them fought in the game, and Lebrie took a terrible holding penalty late in the third period to assure him of a bus ticket to Rockford at some point in the not-too-distant future. When Danault bumped up to the third line, Matt Carey suffered through a number of shifts with Lebrie and Bass.

Danault was the Hawks’ best player at the dot on Friday night, winning five of seven draws.

Carey played another strong game in spite of his linemates over the final two periods, especially on penalty kill duty; his game has been similar in many ways to Ben Smith. He finished the night with two blocked shots, one hit and one takeaway, and played very well on penalty kill duty in the third period.

On the blue line, Stephen Johns made his Blackhawks’ debut and did not disappoint. He appeared to be comfortable, opening the game with Duncan Keith but spending time with Cam Barker and Brent Seabrook as well. He led the Hawks with four blocked shots, and was also credited with two hits and one takeaway. Johns also made a nice play to break up a breakaway opportunity, displaying both speed and the ability to separate an NHL player from the puck in space.

Klas Dahlbeck spent the night next to Hjalmarsson and was also impressive. He blocked a couple shots and moved the puck well. Both of the Hawks’ young defensemen looked ready for the NHL on Friday night.

The Blackhawks power play continues to suck, wasting three advantages against the Rangers.

In net, Corey Crawford went the distance and allowed all four goals on 29 New York shots.

6 thoughts on “Blackhawks Fall To Rangers 4-1”