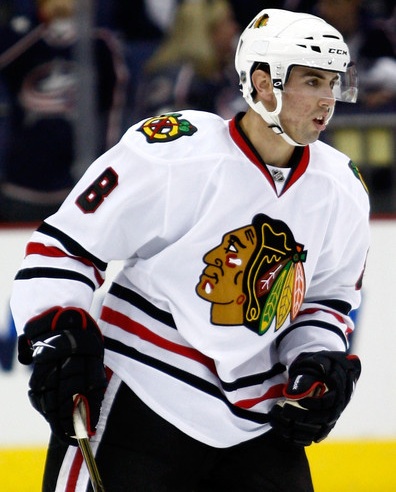 The Blackhawks lost to the Rangers in a length shootout on Friday night, but the talk around the club is more about who won’t be wearing the Indian head when the season begins next week than it is about the preseason finale. When coach Joel Quenneville was asked specifically about defenseman Nick Leddy being part of the team when the regular season opens, his responses were short.

“Organizationally, we have to see what’s going on,” he added later.

Leddy didn’t play in the game at Madison Square Garden, but Sportsnet’s Nick Kypreos reported Friday that as many as seven teams have expressed an interest in Leddy. TSN’s Bob McKenzie noted a week ago that the Hawks have been shopping Leddy all summer, but had been asking teams to take Kris Versteeg in any deal.

With the deadline to get under the cap now less than a week away (5 pm ET on Oct. 7), the time has come to make decisions as an organization. And all signs are pointing to Leddy being on the move soon.

On the ice, Corey Crawford played well and the Hawks finally scored a power play goal, but the Hawks lost in a nine-round shootout. Patrick Kane scored the power play goal and then was the middle man on a gorgeous Saad-to-Kane-to-Shaw sequence that ended with Andrew Shaw putting the Blackhawks on top 2-1 late in the second period.

Martin St. Louis and Ryan Malone scored the two goals in regulation for the Rangers.

One defenseman who hopes to be in the mix for the NHL roster is Klas Dahlbeck, was was recalled from Rockford for the game on Friday. He played another good game, his third preseason contest for the NHL club, skating 22:35 with two hits and one blocked shot.

Dahlbeck skated with Brent Seabrook, and they each skated a team-high 1:33 short-handed in the game. Chicago’s penalty kill was perfect on two opportunities.

Trevor van Riemsdyk also skated over 20 minutes in the game (20:39) and looked good for most of the night again. He was credited with one blocked shot and one hit on the night. The question over the next four days is whether he did enough to earn the final spot on the crowded blue line ahead of veterans Kyle Cumiskey and David Rundblad.

Cumiskey skated 17:58 in the game and blocked one shot. Rundblad skated 16:26, the lowest number on the Hawks’ blue line, and was credited with two blocked shots and two hits.

Daniel Carcillo, who was a late addition to the roster, did manage to get into a fight.