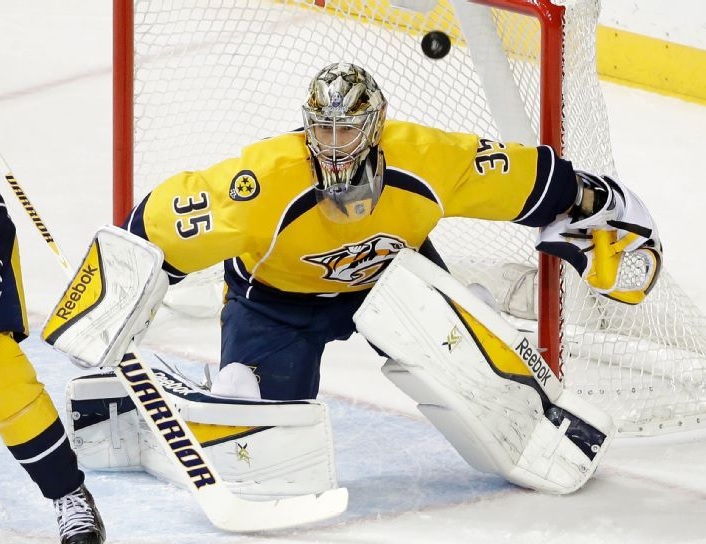 James Neal provided all of the offense Nashville needed and a healthy Pekka Rinne had a marvelous third period as the Predators handed the Blackhawks their first regulation loss of the 2014-15 season. The final box score shows the Hawks out-shooting the Preds 32-27, but Nashville dominated the flow most of the night before a desperate Chicago team began to press in the third period. Indeed, 17 of the Blackhawks’ 32 shots came in the final 20 minutes; the shot totals weren’t even until under six minutes remained in the game.

Andrew Shaw scored in the third period to bring the Hawks back to within one, but a final push wasn’t enough. With the offense struggling, coach Joel Quenneville mixed up his lines and found some success putting Shaw between Marian Hossa and Patrick Sharp.

Dan Carcillo skated only nine shifts (6:14) in the game, and Bryan Bickell disappeared for most of the second half of the game. Bickell was limited to 12 shifts in the game.

Rookie Trevor vanRiemsdyk led the Hawks with four blocked shots in the game, while Michal Rozsival was the only Blackhawks player credited with more than one hit in the contest.

Jonathan Toews won 13 of 25 faceoffs and led the Hawks with five shots on net, but wasn’t able to beat Rinne. Toews, Smith and Kris Versteeg had the best even strength CORSI among Chicago forwards in the game (plus-six each); Smith and Marcus Kruger were the only forwards with a positive even strength CORSI rating at the end of the second period.

On the Blackhawks only power play of the night, the Hawks were able to keep the puck in the offensive zone for almost the full two minutes but weren’t able to beat Rinne. Neal scored his second goal 65 seconds after their man advantage ended. The Hawks successfully killed both of Nashville’s power play opportunities.

Brad Richards continues to suck. It’s hard to sugarcoat another mediocre performance that saw the veteran put only two shots on net and give a puck away at the blue line in under 12 minutes of action. His 14 shifts were the least of Chicago’s forwards in the loss.

The Hawks next game is in St. Louis on Saturday night, when they’ll face a Blues team that lost 4-1 to the Vancouver Canucks on Thursday night.