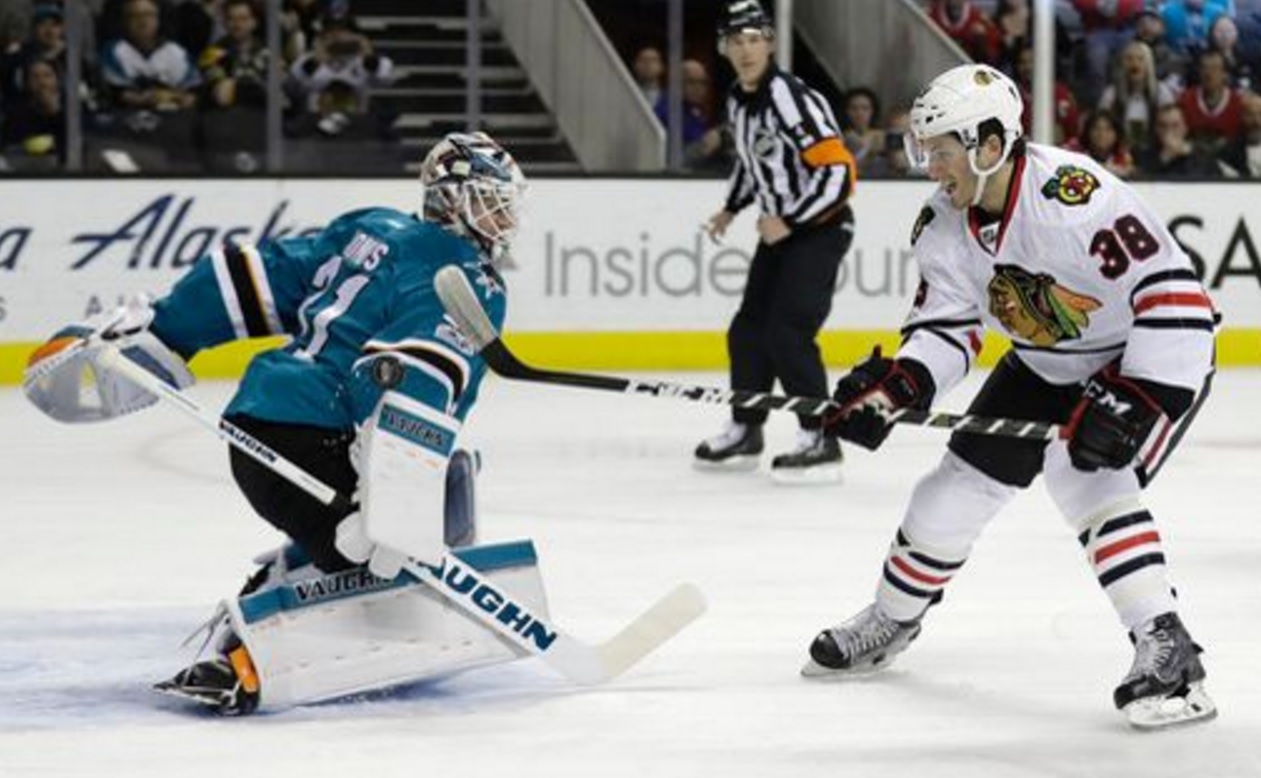 After limping into the All-Star Break, the Blackhawks wanted to get off to a fast start to the season’s “second half.” So, of course, a date against Pacific-leading San Jose was a perfect test to open the home stretch.

In the opening 20 minutes, Chicago picked up where they left off before the break; the Hawks were out-shot 10-7 but Corey Crawford kept the score knotted at zero. San Jose had two empty power plays in the first period, though, and Chicago was blocking shots well (led by Tanner Kero’s four blocks).

The Blackhawks continued to have issues getting the puck to the net, and were officially credited with only 10 shots on net half-way through the game.

At 11:41, the hottest Sharks scorer broke the the shutout. Patrick Marleau’s 18th of the season gave San Jose a 1-0 lead… for a moment. Coach Joel Quenneville requested the officials take a second look at the play and, upon further review, they ruled San Jose was offside. Good challenge, no goal, still tied at nothing.

Artem Anisimov went to the box a couple minutes after the challenge and Marleau scored his 18th of the season – which would stay on the board. The power play goal now officially gave the Sharks a 1-0 lead at 14:06 into the second period.

When Marleau’s goal went in, Chicago had been credited with more blocked San Jose shots (17) than they had put on net (11) in more than 34 minutes of hockey.

Less than three minutes after Marleau scored the 499th regular season goal of his career Dennis Rasmussen scored his fourth of the 2016-17 season to tie the game at one.

Chicago rallied with a strong offensive stretch to close out the second period and, with 40 minutes in the books, the Hawks were being out-shot 21-17. Chicago had 18 blocked shots in the opening two periods, led by four from Tanner Kero. And recently recalled defenseman Gustav Forsling led the Hawks with two takeaways in a team-low 6:46 of ice time.

In an effort to find some offense, Quenneville sent out Panarin with Jonathan Toews and Marian Hossa to open the third period. Nick Schmaltz, who had started with Toews and Hossa, bumped to the line with Kane and Anisimov. The line changes were effective and the Hawks carried the first half of the third period, but weren’t able to beat Martin Jones.

As the game entered the final 10 minutes, momentum started swinging in favor of the Sharks. With 2:03 left in reglation, Tomas Hertl was able to beat Crawford and give the Sharks a 2-1 lead. Joe Pavelski extended the lead to 3-1 with an empty net goal, his 17th of the season.

That would stand as the final score, with the Blackhawks getting out-shot 29-25.

Andrew Desjardins skated 12 minutes with two blocked shots, one his and zero points.

Marcus Kruger, Michal Kempny and Jordin Tootoo were scratches for the game.