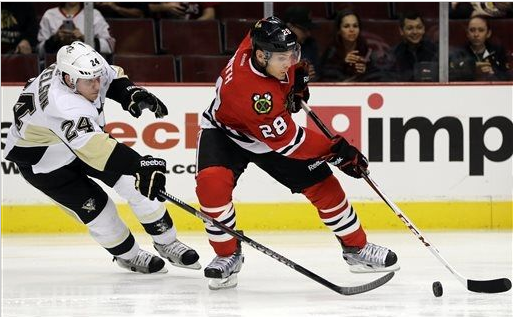 For the first time since 2006, Sidney Crosby played a game in Chicago. This time, in a meaningless preseason game, Crosby and the Penguins escaped with a 4-3 shootout victory. Ben Smith had a very good game for the Blackhawks. He skated more than four minutes on both power play and penalty kill duty, assisted on Patrick Sharp’s goal to open the scoring, and potted a short-handed goal of his own in the second period. In over 20 minutes of total ice time, Smith was also credited with two blocked shots, one hit and three takeaways.

Teuvo Teräväinen was impressive yet again. He made a few plays in traffic that brought fans to the edge of their seats, including one moment in the second period where he eluded four Penguins players before flipping a pass across the ice to a wide open Patrick Kane. He might be headed back to Europe for the season, but Teräväinen has certainly teased Hawks fans enough in two preseason games that there will be plenty of buzz when he comes back to the NHL for good.

Teräväinen had a much better night at the dot in his second preseason game. He won nine of 16 faceoffs against Pittsburgh, and was the only Blackhawks player to win more than half of his faceoffs. Brandon Saad struggled again, winning only five of 15 draws in over 20 minutes of ice time. Drew LeBlanc won only two of seven, and Marcus Kruger won just four of 12 on the night.

Chicago’s goals came from Sharp, Smith and Brandon Bollig, with Bollig’s goal forcing the game into overtime. It took a shootout to determine the victor in the game, and Kane, Teravainen and LeBlanc were all unable to beat Tomas Vokoun. Beau Bennett beat Nikolai Khabibulin in the first round of the shootout for the game-winner.

Khabibulin allowed three goals against 30 Pittsburgh shots in regulation and overtime. The goals for Pittsburgh were scored by Derrick Pouliot, Joe Vitale and Crosby.

The Hawks’ special teams got plenty of work in the game. Chicago was short-handed five times, allowing one power play goal in the game. Meanwhile, the song remains the same for the Hawks’ power play, which was 0-6 on Thursday night.

Chicago travels to Washington for a game Friday night.

6 thoughts on “Blackhawks Fall To Crosby, Pens in Shootout”