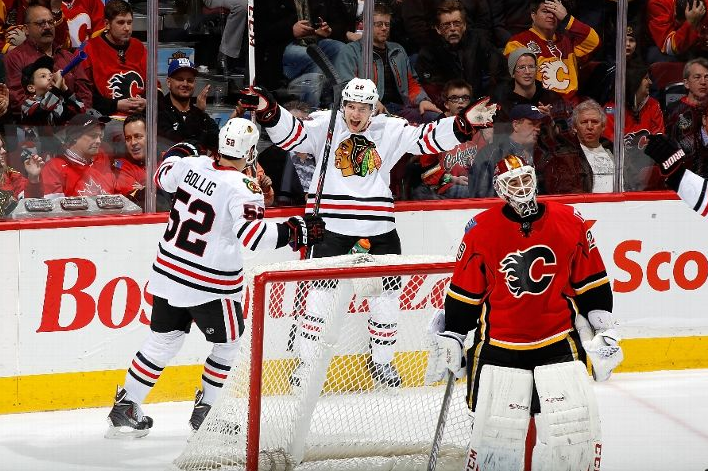 Both teams scored a short-handed goal and neither starting netminder finished the game as the Blackhawks and Flames skated to an overtime decision. Unfortunately, as has been the trend in 2014, extra hockey ended with the Hawks disappointed as the Flames emerged with a 5-4 victory. Mikael Backlund scored to give the Flames a lead only 73 seconds into the game, but Patrick Kane scored the Hawks’ first goal of the game to erase the one-goal deficit less than six minutes into the contest.

Lance Bouma scored Calgary’s second goal of the first period at 11:34 into the first, a second soft goal against for Chicago starter Antti Raanta. Marian Hossa scored the first of his two game-tying goals five minutes after Bouma’s tally, getting a stick on a Jonathan Toews’ rebound. The goal was initially credited to Patrick Sharp, who was also in the area, but was ultimately given to Hossa.

Calgary opened the second period controlling the action. Matt Stajan scored his ninth goal of the season at 3:21, and Backlund added his second goal of the night, a short-handed score, at 10:25 to end Raanta’s evening. Coach Joel Quenneville made a change between the pipes after Raanta allowed four goals against 15 shots in just over 30 minutes.

With Corey Crawford in net, the Hawks offense woke up. Ben Smith scored a big goal less than three minutes after Backlund’s short-handed goal, a shot that hit Calgary starter Reto Berra’s glove but found its way into the net. Hossa added a short-handed goal to tie the game in the final three minutes of the second period, and that would be the end of Berra’s night.

Berra was removed after the second period, allowing four goals against 24 shots.

And in overtime, for the ninth time in their last 10 overtime games, the Blackhawks came up short. TJ Brodie scored 2:26 into the extra session to send the Hawks to Vancouver with only one point. The Blackhawks failed to get a single shot on net in overtime, and Crawford stopped three of Calgary’s four shots.

The Hawks successfully killed both of Calgary’s power plays, extending the team’s penalty kill streak to 16 straight in their last six games.

Brandon Pirri started the game on the second line between Patrick Kane and Kris Versteeg, and won four of eight faceoffs in the opening period. He failed to win any of only three faceoffs in the game’s final 40 minutes, however. Pirri skated 15:05 in the game and was credited with one hit.

Bryan Bickell returned from being a “healthy” scratch to once again skate the lowest ice time total – only 10:01 – on the roster. He was credited with two hits, but his play on Stajan’s goal was replayed a number of times during the broadcast. He once again looked tentative and slow, and a player that needs his confidence to be effective has absolutely none.

Michal Handzus got the night off with Pirri re-joining the team, and Smith stepped up with 2:14 in short-handed ice time. Smith also won four of eight faceoffs in the game and was credited with one takeaway.

Chicago has gone to overtime in seven of 13 games in January and have lost six times; their only win came in the shootout against Boston at the United Center.

The Blackhawks are back in action on Wednesday night in Vancouver.

62 thoughts on “Blackhawks Fall To Flames In OT”