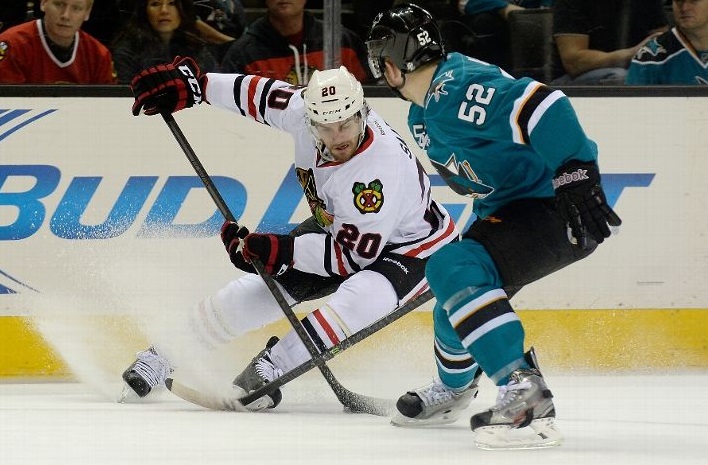 Corey Crawford made 38 saves and played a fantastic game, but his effort wasn’t good enough as the Blackhawks dropped another game in a shootout. Both netminders played exceptionally well, and all of the scoring in the game took place during a single power play. Brad Stuart went to the box at 5:43 into the third, opening the “flood gates” for the game’s two goals.

Joe Pavelski scored a short-handed goal, his 29th of the season. Only 73 seconds later, a sequence of great plays ended with Brandon Saad scoring his 18th of the season. Brent Seabrook held the puck in the offensive zone, passing to Marian Hossa who flipped the puck to Kris Versteeg. Versteeg found Saad on the opposite side of the crease, and the young forward finished the play and tied the game.

And that was the sum of the offense for the night.

Brandon Pirri only took three faceoffs – winning two – in the game in spite of getting 11:43 on the ice. Versteeg and Andrew Shaw won four of six faceoffs each and Ben Smith won four of seven at the dot; Jonathan Toews won only six of 19 in the game, and Michal Handzus won only one of five. Marcus Kruger won five of 12 in the game.

For the Sharks, Niemi stopped 29 of 30 shots to earn the victory. Forward James Sheppard was credited with only three hits in the game, but he agitated the Hawks the entire night. Brent Burns and Tommy Wingels were credited with seven shots on net each to lead San Jose’s effort.

45 thoughts on “Blackhawks Fall To Sharks In Shootout”