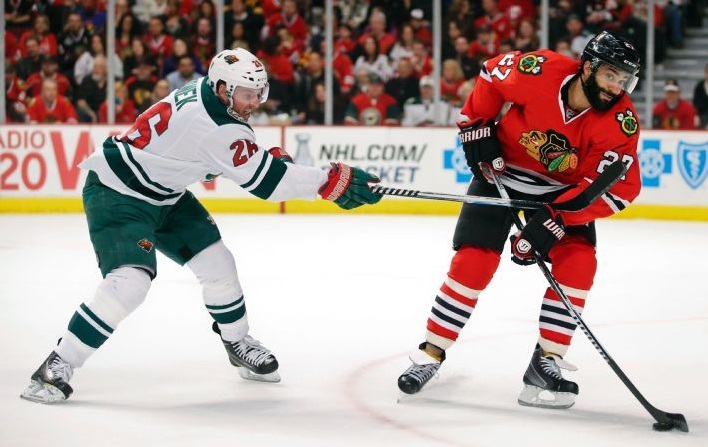 Bryan Bickell got the Blackhawks on the board with less than two minutes remaining in regulation, but it was another case of too little, too late for the Chicago offense. With the Blues getting shut out at home by the Jets, the Hawks let another opportunity get away.

Neither team was able to score in the game’s opening 40 minutes, but Minnesota was able to beat Corey Crawford twice in 3:44 in the middle of the third period to put the game away.

The game-winner was scored by Jason Zucker, who returned a month earlier than anticipated from a broken clavicle (cough… Patrick Kane…). Zucker had been out since Feb. 9 but his goal was his 19th of the season. He skated 15:47 and put a five shots on net in the victory.

Mikael Granlund scored the first goal of the night for the Wild.

Chicago announced earlier on Tuesday that center Brad Richards is done for the remainder of the regular season, which meant recently signed college free agent Kyle Baun made his NHL debut. Baun skated on the Hawks’ second line with Brandon Saad and Antoine Vermette, who returned to the center position.

Baun was credited with one shot on net and a team-high five hits in 14:24, while Vermette won 10 of 15 faceoffs in the game; the second line played well, but failed to generate any offense.

Crawford made 28 saves against 30 shots in the loss, and made a couple magnificent saves just before Granlund got Minnesota on the board. Unfortunately, a rebound led to Granlund’s goal; Michal Rozsival had a great view to watch the goal go in.

David Rundblad skated himself out of position on Zucker’s game-winner, and a nice pass from Chris Stewart set up the shot.

UPDATE: the Avalanche beat the Preds 3-2, meaning the top three teams in the Central all lost on Tuesday night.

64 thoughts on “Blackhawks Fall To Wild In Home Finale”