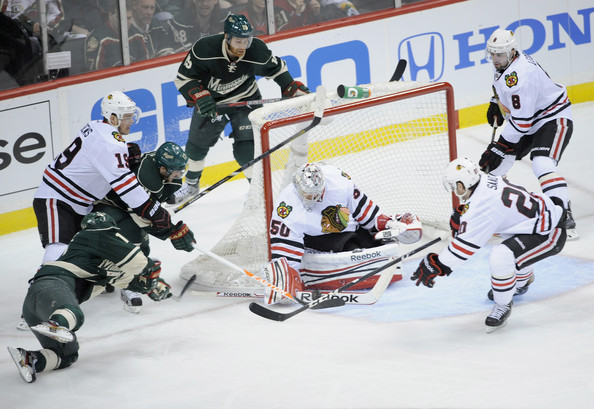 The Blackhawks and Wild went to overtime for a second time in three playoff games on Sunday afternoon. This time, the Wild were able to emerge victorious.

Corey Crawford had to carry the Blackhawks through most of the regulation periods, making 34 saves against 36 shots and dealing with a lot of traffic throughout. The two goals for the Wild in the first 60 minutes were nearly identical – backhand shots over Crawford’s left (glove) shoulder – but Crawford was able to stand strong.

In the overtime, Jason Zucker snuck a puck between Crawford and the post to win the game.

For the Hawks, both regulation goals came from defensemen off cross-ice passes from Patrick Kane. Johnny Oduya opened the scoring in the first period, and Duncan Keith tied the game with less than three minutes remaining in the third. For Kane, the two assists give him five through three games against Minnesota.

On the Keith’s goal, NBC did a good job of showing Cal Clutterbuck mugging Jonathan Toews in front of the Wild bench as the two were going off for a change. That play delayed the Wild change, leaving Keith wide open. Clutterbuck targeted Toews throughout the game, and was credited with a game-high eight hits in the contest.

Hitting was made a key for Minnesota by coach Mike Yeo coming in, and the players were on the attack throughout the game. The Wild out-hit the Hawks 34-13 in the game, and took control of the game in a second period that was dominated by the home team. In the middle frame, Minnesota out-shot the Hawks 14-8 and owned every zone of the ice.

One of the players Minnesota needed to improve between Game Two and Game Three was their captain, Mikko Koivu, and he responded. After two tough games at the dot, Koivu won 15 of 20 faceoffs and was credited with three hits. The ref stopped play to talk to Koivu before dropping the puck on at least four occasions, but he was allowed to continue with the draw each time.

Minnesota dominated the Hawks at the dot, led by Koivu. Toews was the only Hawks center to win more than half of his faceoffs (13 of 24 on Sunday), as the Wild won 40 of 72 in Game Three.

The Blackhawks powerplay continued to do nothing, failing on both advantages. However, Chicago’s penalty kill was successful all three times Minnesota had the advantage.

62 thoughts on “Blackhawks Fall To Wild In Overtime”