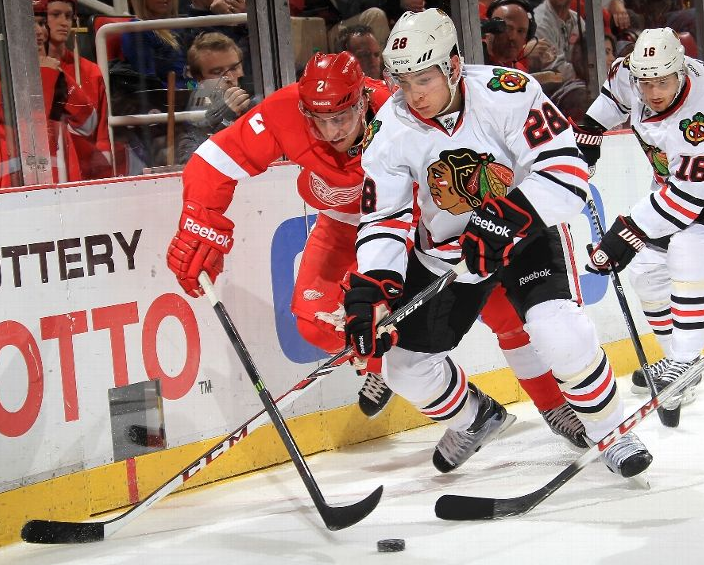 Because the Blackhawks hadn’t played an overtime game since Sunday, they played an extra few minutes against the Red Wings in Detroit on Wednesday night.

The game went deep into a shootout, and when the dust settled the Red Wings escaped with the second point.

Marian Hossa started the scoring for Chicago, putting his 21st of the year past Jonas Gustavsson at 8:41 into the first period. Less than two minutes later, Brandon Saad crashed the net and a bouncing puck found Andrew Shaw who tapped the puck past Gustavsson for his 14th of the season.

Once they established the two-goal lead, though, the Hawks defense fell asleep.

Tomas Tatar cut the lead in half only 48 seconds after Shaw’s goal, and Patrick Eaves tied the game with less than three minutes remaining in the opening period.

Patrick Sharp gave the lead back to the Blackhawks four seconds into a power play at 5:03 into the second, but that lead once again didn’t last long; Kyle Quincey scored 77 seconds later to bring the score back to even.

Niklas Hjalmarsson and Johnny Oduya were on the ice for each of the Red Wings first three goals. Hjalmarsson finished with a team-high four blocked shots and played well short-handed, but the first 40 minutes were rough for the Hawks second defensive pair.

Gustav Nyqvist put Detroit ahead 4-3 later in the second, scoring while Duncan Keith and Brent Seabrook were on the ice rather than Hjalmarsson and Oduya. The Wings, once trailing 2-0, took a 4-3 lead into the dressing rooms after two periods.

Marcus Kruger had a strong game, scoring the game-tying goal in the third period and winning his first 11 faceoffs of the game. He finished the night winning 12 of 14 faceoffs with one takeaway and one blocked shot.

On the fourth line with Kruger, Brandon Bollig continued his stretch of strong play. He was credited with three more hits and one takeaway in 10:18, and once again stayed out of the penalty box. Seabrook and Shaw were also credited with three hits in the loss, while Shaw won seven of 13 faceoffs in over 19 minutes on the ice.

Corey Crawford stopped 27 of 31 shots through 65 minutes, while Gustavsson made 31 saves against 35 shots on the night.

The Blackhawks successfully killed all four Wings power plays, and have been good on their last nine short-handed situations over three games.

Meanwhile, the Hawks did convert on a power play but they have struggled in the new calendar year while skating with the advantage. In 10 games in 2014, the Hawks are now only 4 for 29 (13.8 percent) on the power play.

Chicago will be back in action on Thursday night in Minnesota against the Wild, who expect to have Zach Parise back on the ice.

38 thoughts on “Blackhawks Fall To Wings In Shootout”