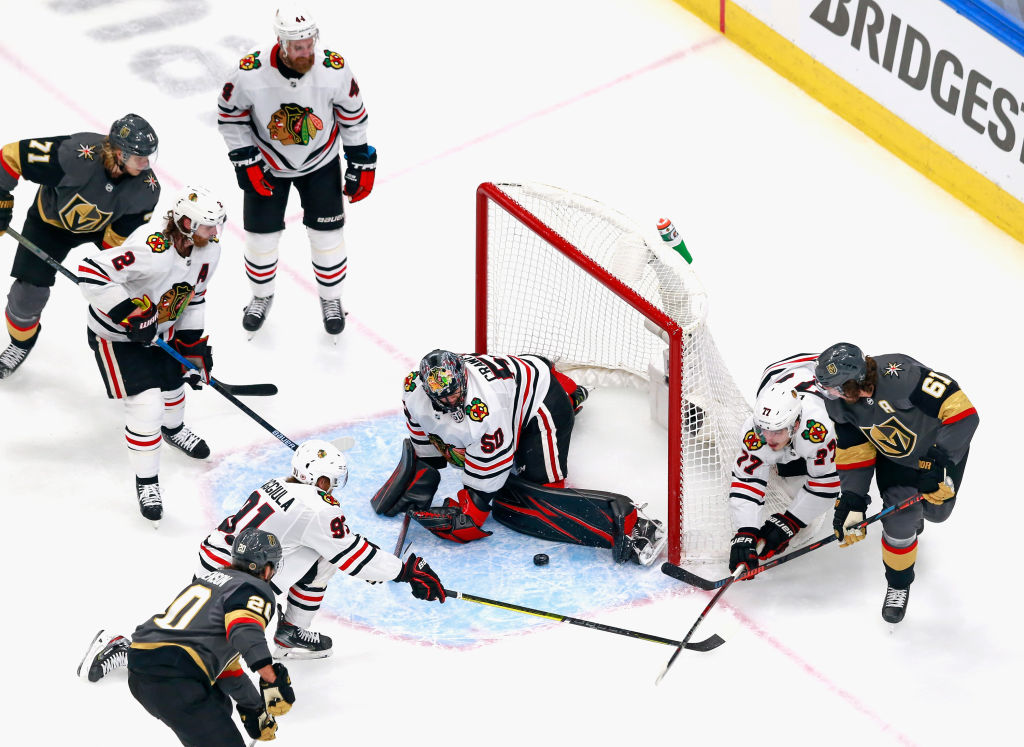 The realities of the Blackhawks’ present and the issues with their future were on full display during 67 entertaining minutes of hockey on Thursday evening.

Chicago’s present and its future have started to mix this season, as Kirby Dach and Adam Boqvist broke into the NHL lineup as regulars. But whenever the next generation begins to establish itself there are bumps in the road.

These playoffs have been a solid coming out party for Dach. He’s shown better physical strength than he did beginning the regular season, something that should be expected from a teenager. But he’s looked like a player who’s ready for prime time. On Thursday, he checked a significant box in his NHL career: Dach scored his first postseason goal.

However, the other half of the Hawks’ recently drafted rookie combination was absent from the lineup. For as much as Dach has appeared to have improved since the layoff began, these playoffs have been a struggle for Boqvist. On Thursday the team opted to dress another youngster, Lucas Carlsson, on the blue line.

Carlsson, still only 23 in his own right, showed some really nice things this season when given the opportunity. But the eyes of the organization and its fans have been on Boqvist and, beginning next season, Ian Mitchell.

Carlsson skated 10:33 with one hit in the game.

Chicago’s Calder Trophy finalist, Dominik Kubalik, continued his strong postseason. He tied the game at two in the second period.

The Blackhawks have a couple “older” players who contributed on Thursday as well. Alex DeBrincat (22) had an assist on the Blackhawks’ third goal, scored by Dylan Strome (23).

With DeBrincat, Strome, Dach, Kubalik and Boqvist rolling in these playoffs, there’s a reason for hope.

Chicago’s old men aren’t going anywhere, either. Not yet. Patrick Kane picked up an assist on each of the Blackhawks three goals, moving him up another list in the history of the Blackhawks’ franchise.

Jonathan Toews continued his good series as well, winning 15 of 25 faceoffs and picking up an assist of his own.

Chicago was trailing 2-0 and 3-2 and was able to come back and tie the game. And they forced overtime. All nice to know and building blocks for the future.

The reality is simple: the Hawks do not have the depth of skill to compete with a team like the Vegas Golden Knights. Chicago was out-shot 39-25 in a critical Game Two and felt like they were chasing the entire night.

Corey Crawford has been good at times, but not sharp enough in these playoffs. Chicago got away with it against Edmonton because they haven’t played defense since Messier left, but Vegas is too good top to bottom for Chicago to get away with their mistakes.

The Blackhawks have work to do to get back into this series. And they have work to do before next season starts (whenever that is) if they want to chase down teams like Vegas and Colorado in the Western Conference.

88 thoughts on “Blackhawks Fight Back, Still Fall in OT”