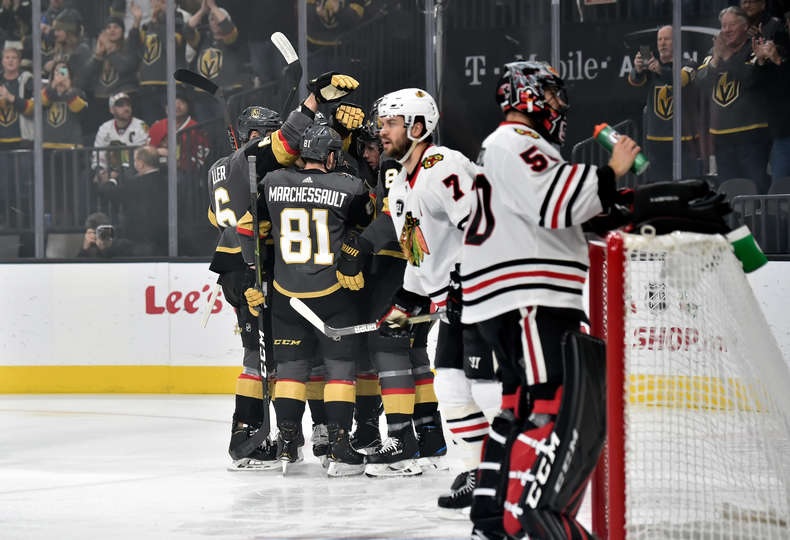 Hey, remember the game in Anaheim when the Hawks looked terrible in the first period, gave up two goals, and then scored two in the second period to tie the game? Only to give up two in the third and lose?

It’s deja vu all over again.

“Blackhawks can’t get down early,” they said.

Vegas scored 88 seconds into the game.

Four minutes into the second period Jonathan Toews scored his 13th of the season to cut the lead in half.

John Hayden had a terrific shift leading to the Toews goal.

Dylan Strome scored his third since being acquired and sixth of the year to tie the game 12 minutes later.

Sadly, the game was tied after 40 minutes in spite of the Blackhawks getting four power plays. Remember that time the Hawks brought in Barry Smith to fix the special teams? It was going to be a game-changer, right? Good times…

When Artem Anisimov scored at 7:15 into the third, the Blackhawks (cough) had a lead (cough).

What was going on? Suddenly the Hawks had momentum, looked like they had remembered how to finish the job, and were ready to be a playo….

But they had a lead. Moral victories?

Toews had a big night in the loss. For those who love symmetry, he skated 19:19 in the game. Chicago’s captain scored, won 16 of 23 faceoffs, was credited with two hits, three takeaways and a game-high seven shots on net.

There are a lot of things wrong with these Chicago Blackhawks. Jonathan Toews isn’t one of them.

Patrick Kane picked up one assist and seven shot attempts (four on net) in 27:49 on the ice.

Strome was credited with three blocked shots and won 10 of 18 faceoffs in the game. He skated 19:14.

If anyone wants to start the “Jeremy Colliton hates kids” narrative train, go ahead. Henri Jokiharju once again had the lowest ice time on the blue line (12:37). He was credited with two blocked shots, two hits and two takeaways but saw only two seconds of special teams time (both seconds on the power play).

124 thoughts on “Blackhawks Find Another Way To Lose In Vegas”