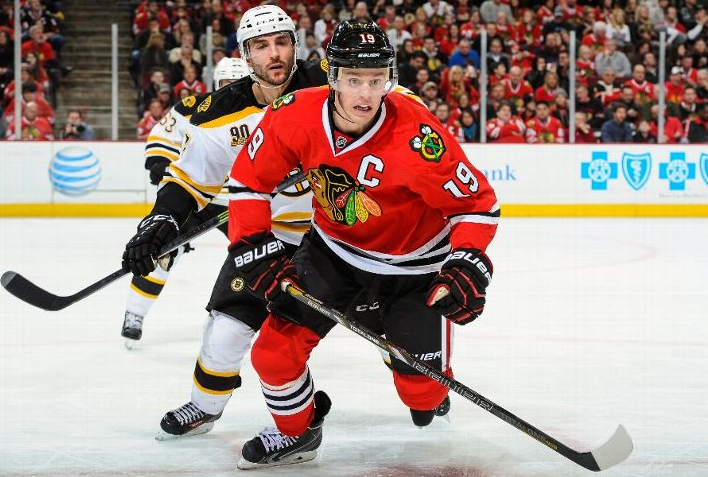 After beating the hottest team in the league on Friday night, the Chicago Blackhawks showed championship mettle again on Sunday afternoon when they won a rematch of the 2013 Stanley Cup Final with a 3-2 victory over the Boston Bruins.

With two strong performances this weekend, the previously struggling Hawks bounced back and re-established their place as the team to beat in the NHL.

Overtime had been a problem for the Blackhawks since the beginning of November; Chicago had lost seven straight games that had lasted longer than 60 minutes before Sunday. But the Hawks were able to earn the second point for the first time since Nov. 29 behind a shootout goal by Patrick Kane, who had struggled in the shootout this year himself (0-9 coming in).

The Blackhawks remain the NHL’s best offense, averaging 3.51 goals per game. But Anaheim (third – 3.39) and Boston (seventh – 2.85) came in with high-powered offenses of their own. Corey Crawford had two phenomenal games, posting a combined .930 save percentage (53 saves against 57 shots).

Crawford hadn’t won in the new calendar year before breaking through with an exceptional performance against Anaheim. On Sunday, he was strong once again as the Bruins put 36 shots on net in regulation and overtime – and the shootout. Only Brad Marchand beat Crawford on Sunday, scoring twice in regulation and once in the shooutout.

Crawford has not allowed more than three goals in seven starts in January, and has a .922 save percentage in spite of his 2-1-4 record in the month.

Chicago’s penalty kill also made a statement this weekend. Boston and Anaheim are both converting 18.9 percent of their chances with the advantage this year, which is tied for 12th in the NHL with San Jose. But the Hawks commitment to blocking shots (most notably by Michal Handzus on Sunday) and Crawford’s work killed all six penalties called on the Hawks.

The superstars continue to shine for the Blackhawks, led by Marian Hossa’s three goals in the last two games. But a surprisingly significant impact came from perhaps the least-likely source on the Hawks roster: Brandon Bollig.

In 23:51 on the ice over the two games (35 shifts), Bollig was credited with 14 hits, one blocked shot and scored his fifth goal of the season to tie the game in the second period. Maybe his most impressive stat was the zero penalty minutes he accumulated; he was challenged on a number of occasions in both games, but didn’t drop the gloves.

Marcus Kruger was credited with a team-high four blocked shots on Sunday, and had an assist in both weekend games. He now ranks third among all NHL forwards with 51 blocked shots this season.

Kruger has already tied his career high with 17 assists in only 51 games, and is five points away from his career high of 26 that was set in 2011-12. He is also winning a career-best 56.4 percent of his faceoffs.

Hossa, who scored his 20th goal of the season Sunday, has scored five goals and has seven points in his last five games. He has now scored at least 20 goals in 13 of the last 14 NHL seasons, only coming up short of the mark when he scored 17 in 40 games during the lockout-shortened 2013-14 season.

Hossa continues to be one of the best defensive forwards in the league and showed it again on Sunday. He leads all NHL forwards with 57 takeaways in only 46 games, and also leads all forwards with a plus-25 rating this season. Equally impressive: Hossa has only been called for 10 penalty minutes this year, a number Jonathan Toews earned with a single toss of a broken stick on Sunday.

Chicago is back in action on the road against Detroit on Wednesday night.