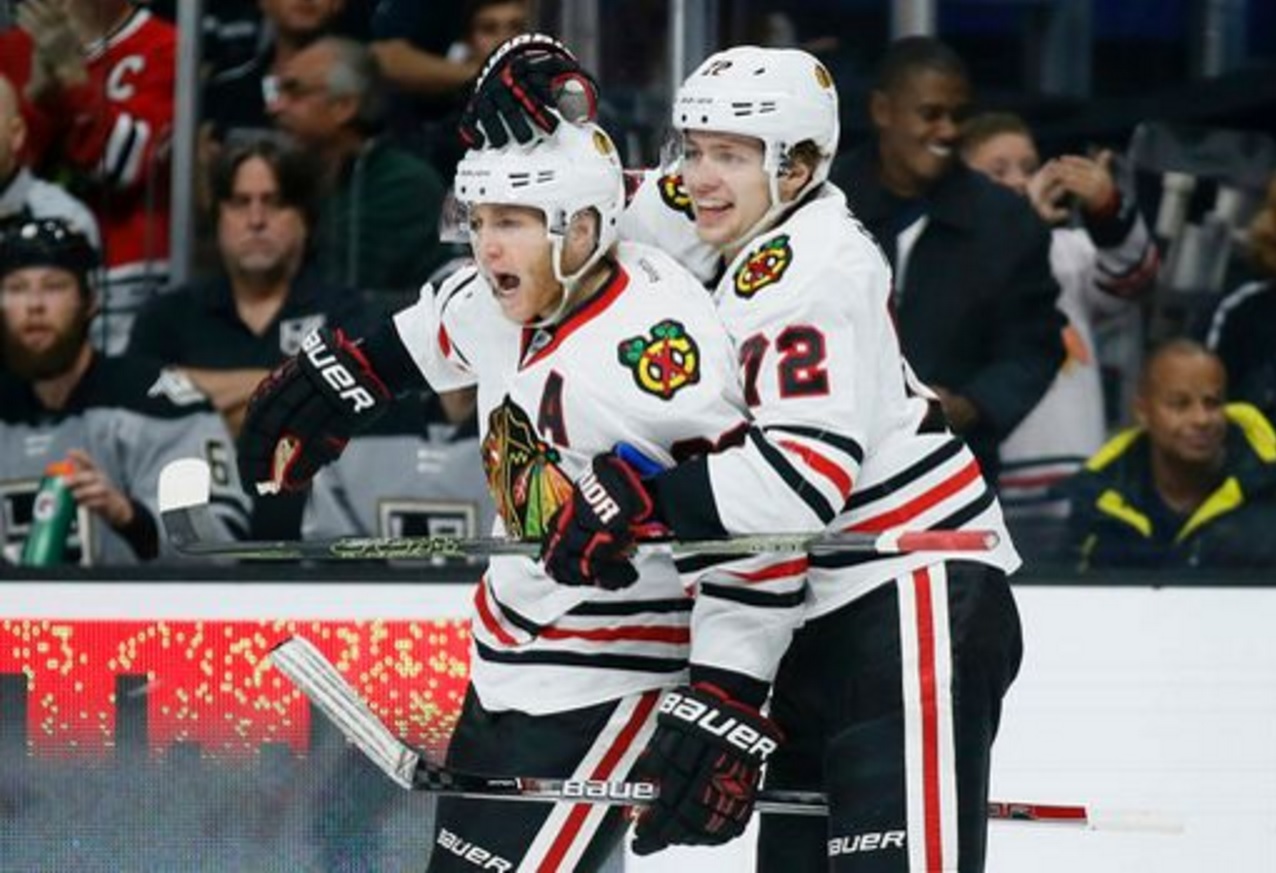 After sneaking out of Anaheim with a win on Friday afternoon, the Hawks took the ice late Saturday night in Los Angeles without their captain to close out the Circus Trip.

Without Jonathan Toews, the Hawks skated rookies Vinnie Hinostroza and Ryan Hartman with Marian Hossa again. Andrew Desjardins joined the lineup on the fourth line with Nick Schmaltz and Richard Panik. On the blue line, Michal Kempny returned in place of Michal Rozsival.

It didn’t take long for the game to get interesting. Only 72 seconds into the game, it appeared the Kings had taken a 1-0 lead on a pretty turn-around backhand goal by Tyler Toffoli. But the Blackhawks challenged there was interference – and won the argument.

The game stayed tied at zero until Patrick Kane redirected a Duncan Keith shot past Peter Budaj from about three feet wide of the cage.

Kane’s eighth of the season was Chicago’s first shot on net in a first period that was dominated by the Kings. LA out-shot Chicago 13-4 in the opening 20 minutes and predictably dominated at the dot, but Darling was very good (when not interfered with) and the skaters in front of him put one on the board.

Each team had a couple decent chances in the third period, but the Blackhawks carried the action until Brent Seabrook flipped a puck out of play with 61 seconds left in regulation. He went to the box for a delay of game penalty, and his teammates were able to kill off the rest of regulation.

The Hawks won only 20 of 56 faceoffs in regulation, but held the Kings to only two shots on net in the third period to maintain the tie and earn at least one point.

Chicago successfully killed the rest of Seabrook’s penalty, but as the Blackhawks defenseman skated out of the box to join the play Jeff Carter deposited a shot over Darling’s glove from the circle to end the game.

Darling stopped 27 of 29 in the loss, but kept his team in the game early when the Kings were controlling the action. Budaj stopped 18 of 19 in the win for LA.

Marcus Kruger and Duncan Keith led the Hawks with two blocked shots each. Desjardins, Hinostroza and Dennis Rasmussen led Chicago with two hits each; Rasmussen won only three of 13 faceoffs in the game. Rasmussen and Hinostroza finished with three shots on goal, leading the Hawks.

The Hawks return home to face the Panthers on Tuesday night at the United Center.