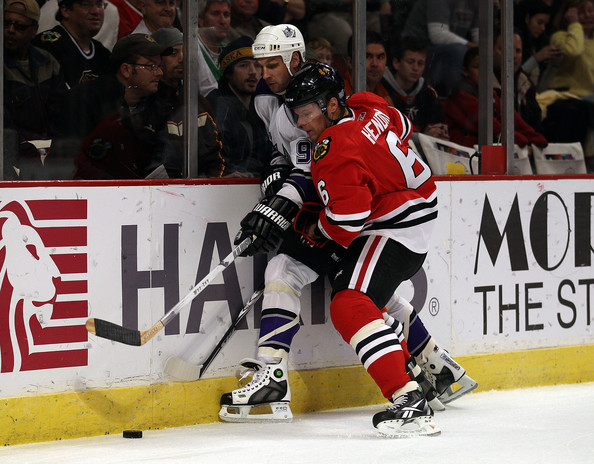 When the Blackhawks face the New Jersey Devils on Wednesday night, their fourth line will be made up of two defensemen and a wing playing center.

That’s right. Jordan Hendry and John Scott will flank Fernando Pisani as the fourth line for Joel Quenneville’s team tonight. This comes on the heels of a tough road loss at the Rangers in which the Hawks admittedly struggled to get a quality scoring chance. The team demoted Ryan Potulny and Ben Smith to Rockford on Tuesday.

Why would the Hawks handicap their offense heading into a game they should win? There are a few possibilities.

First, based on ice time in the brief season, it appears the Hawks will give their top nine forwards a substantially heavier work load. With Dave Bolland and Marian Hossa both out until at least the weekend, this means Jack Skille, Jake Dowell and Viktor Stalberg will see increased action.

And those three forwards have earned bigger minutes.

The move to play Hendry and Scott at a forward position is likely a function of Quenneville being encouraged by the play of his young skaters. In most games throughout Quenneville’s tenure as coach in Chicago, the fourth line disappears early in the third period. Tonight he’s placing faith in what was his fourth line to handle a bigger role and contribute in the capacity a third or second line player should in those minutes.

The foundation of this belief is built on the solid early play of Dowell, Skille and Stalberg. The case for the questionable third line is grounded in another hallmark of Quenneville’s tenure: matchups.

The Devils team the Hawks host Wednesday night is more banged up and playing with fewer options than the Blackhawks are right now. We talked about their injury concerns on Tuesday, and a team that was struggling to score with superstar Zach Parise on the ice will have an even harder time with a shorter rotation in his absence.

Quenneville has always been a champion of winning individual matchups. Because the Devils are so short-handed, there is likely a confidence in the Hawks locker room that their depth with three lines is enough to skate with the bodies New Jersey brings to the fight.

Is assuming depth a dangerous proposition? Absolutely. The blow out loss to the young Edmonton Oilers shows that no team is good enough to win a game no matter the competition if that opponent is taken for granted in the NHL today. But the reality of Quenneville’s rotation use means Hendy and Scott are merely cosmetic names on the roster; neither will skate more than seven or eight minutes, and won’t see the ice in a crucial situation.