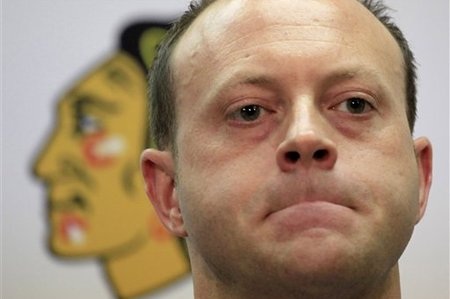 In the wake of the Blackhawks becoming incredibly active at the NHL Draft, the options for Stan Bowman’s summer shopping have opened up.

Let’s look at some players that might be in play for the Blackhawks in the coming weeks. Leino was the odd man out in Detroit last year, and became a surprising component in the Flyers’ run to the Cup Finals. He stepped up his game even further last year, and could be a quality veteran at the right price for the Blackhawks. He’ll turn 28 the day before the 2011-12 season starts (Oct. 6), and his best hockey is in front of him. Most importantly, he’s a left winger who could fit opposite either Patrick Kane or Marian Hossa in Chicago’s top six next year. What might make Fleischmann a wild card is his experience with superior talent playing in Washington, and his ability to step to the dot as well as playing on the left side. He had 21 points in 22 games after being acquired by Colorado mid-season, and could be an appropriate financial move for the Blackhawks. After missing some time with an injury last year, he might be open to a one or two-year deal as well. He’ll be 27 this season, and might be able to fill the second center position. Because of his age, however, he might want a longer term deal than the Hawks are willing to hand out this summer. Cole, 32, has been on our radar for six weeks now, and would be the perfect fit in Chicago. With Troy Brouwer now in Washington, Cole’s combination of scoring ability and physical play (225 hits last year) would make him a solid top-six power forward in Chicago. and, at his age, he might be looking for one or two more shots at the Cup. Fiddler, 31, is an under-the-radar name but might make a lot of sense in Chicago. He recorded 85 hits and blocked 60 shots while winning 53.9 percent of his faceoffs last year in the desert. He also averaged 2:53 on ice short-handed last year as the Coyotes’ primary penalty-killing center. Cut from the same mold as Adam Burish, Talbot had 154 hits while only averaging 15:04 on the ice per night with the Penguins. A well-rounded player with a charity in Pittsburgh and Montreal, he’d prefer to stay put but might walk if the Pens decide to go young. Talbot is only 27 and has a ring, and might be a perfect fourth line rental in Chicago.

Fiddler seems like a no-brainer for Chicago. He’s coming off a two-year deal with a $1.1M cap number, and could be looking for something similar now as a penalty killing specialist. With the Hawks having a handful of centers coming up in the organization, a quality veteran like Fiddler would be ideal.

As a wing, Leino might be a perfect candidate for a three-year deal and might fall within the Blackhawks price range. Cole is more of the traditional power forward that the Blackhawks would look for, and Talbot would be a great bottom-six grinder with an attitude. It’s hard to tell where Bowman will go with his new financial flexibility.

5 thoughts on “Blackhawks Free Agency: Some Forward Options for Chicago”