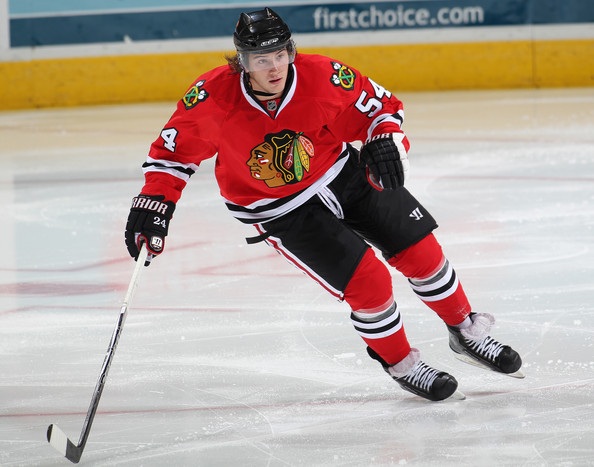 It’s been 10 months since the Blackhawks traded Kris Versteeg to the Toronto Maple Leafs, and neither team got what they had hoped for at the NHL this season. Viktor Stalberg has been underwhelming in Chicago, and Toronto ended up dealing Versteeg to Philly just before the deadline.

But one of the players Chicago received in the trade could be a key piece to their championship puzzle next year.

As fans all over Chicago watch the Hawks get their lunch handed to them by the Canucks, one of the most popular names on the “I miss ______” list is Andrew Ladd. There might be a suitable replacement for Ladd in the system, and he might be in Chicago next year.

Philippe Paradis was the 27th overall selection by Carolina in the 2009 NHL Draft, and has already been traded before his 20th birthday. Some scouts have favorably compared Paradis to Ladd on the ice, and his numbers have backed that up.

He’s listed at 6-2 and 215 pounds and is a big, physical forward who can skate. In the last two years in juniors, he has scored 47 goals and added 50 assists in 122 games; he has also racked up 189 penalty minutes in those games.

At the draft two years ago, he told scouts that his offensive influences were Ales Hemsky and Martin Havlat, but with an added physical dimension. Also, at the 2009 CHL Top Prospects event, Paradis blasted a 95.7 mph shot in the hardest shot competition, defeating seven other prospects.

In four games in Rockford this year, Paradis scored one goal and was called for one penalty. He was an impressive physical player, though, and is maturing into his frame and game well.

Paradis just turned 20 on January 2, but could have present a tough decision for the Blackhawks coaching staff and management this summer. With Stalberg and Troy Brouwer both restricted free agents this summer and Jimmy Hayes now under contract, GM Stan Bowman may look to deal one/both of Stalberg and Brouwer to open cap space.

While Hayes is bigger (6-5, 210) and older (will turn 22 on Nov. 21), he isn’t as physical as Paradis. Both have good hands and work well within space, but Paradis is more of a banger than the elder Hayes.

What is perhaps most important about both Paradis and Hayes is that they are under contract, and each comes with a cap number under $1M next season.

8 thoughts on “Blackhawks Future: Philippe Paradis An Intriguing Player For 2011-12”