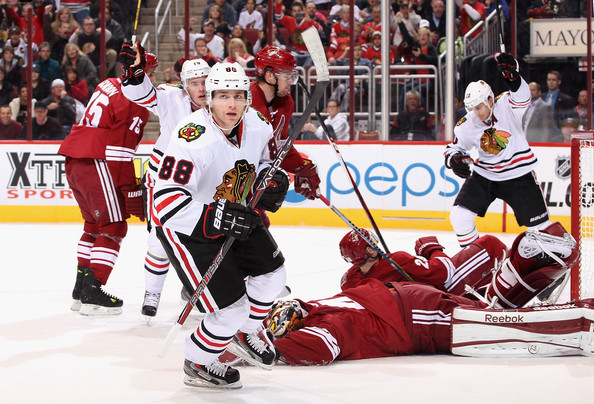 Everyone wanted to see how the Blackhawks would perform in their first game against the Phoenix Coyotes with Raffi Torres in the lineup.

Chicago answered the bell with their most dominant performance of the season.

Where do we begin with the offense?

Five Blackhawks had multi-point games. Patrick Sharp kicked off some rust with three assists and Patrick Kane had an incredible first period that included two goals and an assist as the Hawks blew the doors off the Coyotes.

At the end of the first period, the Hawks had as many goals – four -as the Coyotes had shots.

Chicago’s third line continued to play outstanding hockey. Both Bryan Bickell and Viktor Stalberg had a goal and an assist in the game. Dave Bolland converted a gorgeous pass from Kane as part of the onslaught.

Mike Smith departed after allowing six goals in 35 minutes. In two starts against the Hawks this season, Smith has a 7.57 goals against average.

Also picking up an assist at the expense of Smith were Andrew Shaw, Marian Hossa and Duncan Keith.

Every aspect of the game was dominated by the Blackhawks, and the action really got started when Jamal Mayers dropped the gloves with Torres immediately on his first shift. The bought was good and clean, and Mayers sparked the emotion of his teammates.

The Blackhawks blocked 18 shots in the game, led by five from Brent Seabrook and four from Niklas Hjalmarsson. Shaw won eight of 12 faceoffs and Mayers won five of his six opportunities at the dot.

In the game, Torres scored a meaningless goal with under two minutes left in the game. He was minus-one in the game and only Radim Vrbata saw less ice time on the Phoenix roster.

Ray Emery played with a lead throughout but was very good once again, allowing only two goals against 24 shots to earn his third victory of the season.

One concern came late in the game when Nick Leddy appeared to take a shot in the face just before Torres’ sympathy goal. Leddy immediately departed.

Chicago has successfully dominated a tough, road-heavy early schedule with 20 of 22 possible points, and continue to sit on top of the NHL standings. 26 thoughts on “Blackhawks Get Revenge, Blow Out Coyotes”