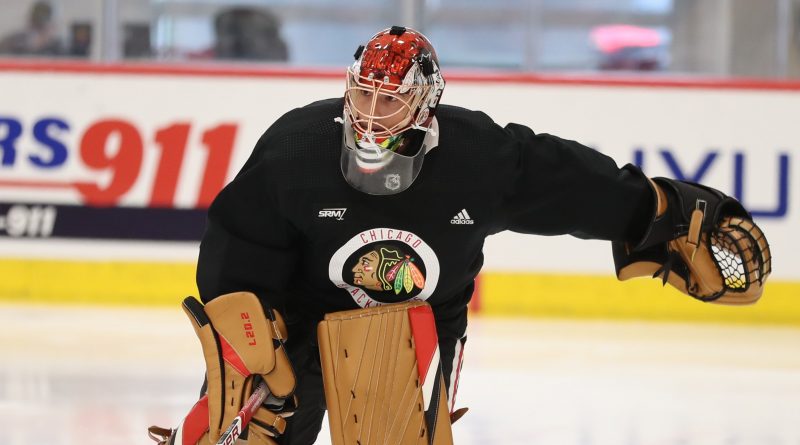 On Tuesday morning, Greg Wyshynski at ESPN published an interesting article that ranks all 32 goaltending groups in the NHL.

To put together his rankings, Wyshynki says they “were formulated through discussions with a variety of goalie experts — coaches, analytics gurus, former players — as well as through stats from sites like Evolving Hockey, Money Puck and Hockey Reference.”

How did the Blackhawks new tandem rank?

Comments: “Fleury’s career renaissance in Vegas was one of the best NHL stories of the last decade. From 2017-18 to 2020-21, he had 75.2 goals saved above average, and added 14 wins to the Knights in the standings, capping that run with his first Vezina Trophy last season. He immediately makes the Blackhawks a better goaltending team than they were in 2020-21 (.903 team save percentage). The question is how good does he need to be in order to make up for their defensive shortcomings?

“‘Am I betting on a career year from Fleury again? I don’t think so. Chicago’s one of the worst defending teams in the league. Plus, Lankinen didn’t finish well at all,’ said one goalie expert.”

With all due respect to the goalie expert quoted at the end of Wyshynski’s comments about the Hawks, the “worst defending teams in the league” is a reflection of last year’s group. The Blackhawks made significant changes to their blue line group this winter, including the blockbuster sign-and-trade deal for Seth Jones. The addition of Jake McCabe is also a huge move to improve the Hawks’ back end.

Are we betting on Fleury replicating his performance from last year? Maybe not. But will a future Hall of Famer be motivated to end his career with another stellar season? Absolutely. And he clearly has something to prove after the ugly divorce with a Vegas club with which he thought he would finish his career.

Also, while Lankinen did finish the season poorly, he showed he can be a solid NHL goaltender throughout the season. A lot went wrong for the Blackhawks last year, and he was playing behind a mediocre group of defensemen. The group in front of him – and Fleury – will be much better this year.

It’s worth noting that the Hawks ranked third in the Central Division behind Colorado (fourth) and Winnipeg (fifth). The rest of the division ranked as follows: Nashville (11), Minnesota (14), St. Louis (15), Dallas (25), Arizona (32).