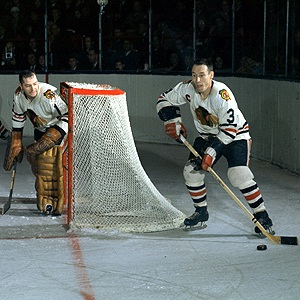 On Sunday, the Chicago Blackhawks confirmed that Hockey Hall of Famer Pierre Pilote has passed away. He was 85.

Pilote spent the best seasons of his career as half of a tremendous tandem on the Chicago blue line with Moose Vasko. He was a brilliant skater who had a terrific shot.

He served as the captain of the Chicago Blackhawks from 1961-68. The only player to wear the “C” in Chicago longer than Pilote is Jonathan Toews, who has been the team captain since 2008.

Pilote appeared in 821 games for the Hawks. He scored 77 goals with 400 assists while wearing the Indian head, and won the Norris Trophy three years in a row (1962-65) and was a member of the 1961 Stanley Cup Champion Blackhawks. Pilote was inducted into the Hockey Hall of Fame in 1975, and the Blackhawks retired the number 3 co-honoring Pilote and Keith Magnuson in 2008. In the official statement from the NHL, Commissioner Bettman said the following:

“A consistent, durable, dependable defender who enjoyed the offensive aspects of the position, Pierre Pilote was a team captain, an eight-time post-season All-Star and a three-time Norris Trophy winner,” Commissioner Bettman said. “Mainstay of the Blackhawks’ 1961 Stanley Cup champion, Pierre also was a man of humor and great dignity and a proud member of the Hockey Hall of Fame. The National Hockey League mourns Pierre’s passing and sends heartfelt condolences to his family, teammates and many friends.”