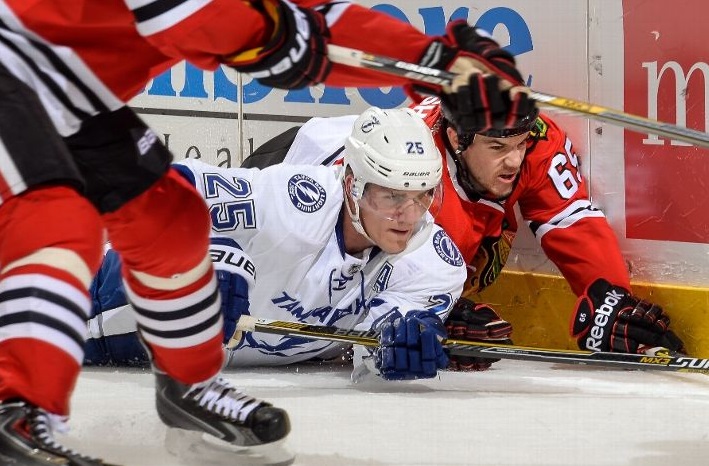 The Blackhawks came into Tuesday night’s game on a five-game losing steak to the Lightning, all of which had come by one goal. But on this night, Chicago had the extra marker.

It took 65 minutes and a couple extra shooters for the Blackhawks to earn a second point at the expense of the first place Lightning.

As has been the story for much of the last couple weeks, the Blackhawks dominated the first period but finished the frame losing on the scoreboard. It took almost five minutes for Tampa to control the puck, but when they did Cedric Paquette put the Bolts’ first shot of the game past Corey Crawford for a short-handed tally.

Brad Richards stayed hot and got the Hawks on the board just after a Valtteri Filppula penalty ended. It was Richards’ third goal of the season, and he was credited with four shots on net in only 11:50.

More importantly, the veteran center appears to be getting comfortable in the limited role he’s receiving from coach Joel Quenneville. Richards has five points (three goals, two assists) in six games in November, but has skated less than 12 minutes in four of those six games.

The Blackhawks took the lead only 78 seconds into the third as Marcus Kruger tipped a Niklas Hjalmarsson keep past Ben Bishop.

Eight minutes later, the Blackhawks got stuck in a tough position and paid for it. Johnny Oduya was hurt blocking a shot, but wasn’t able to limp off the ice before Tampa got back into the zone. Oduya labored to play on one leg, and a clearing attempt was cut off by an official. Nikita Kucherov beat Corey Crawford to tie the game.

Unfortunately, Oduya wasn’t able to return to the ice for the final 10 minutes of the game. Quenneville said after the game that he “hopes [Oduya’s] ok” and that the team would know more on Wednesday.

In Oduya’s absence, Duncan Keith was relied on heavily down the stretch. Keith finished the night skating 31:48, in which he blocked two shots and tied Patrick Kane with a team-high five shots on net.

Hjalmarsson led the way with four blocked shots, while Marian Hossa was credited with an assist and four takeaways in the game. Andrew Shaw had a team-high four hits in the game. Jeremy Morin stepped up his physical play once again, taking exception to a number of questionable hits by Lightning players in the game.

Bryan Bickell skated only 9:39 and was credited with nothing but one shot on net. Peter Regin was limited to only 6:40, a team-low. Regin’s ice time is notable because Daniel Carcillo skated with the team on Tuesday morning, and may be back before the annual November Circus Trip.

Chicago was 0-6 on the power play and allowed the short-handed goal to Paquette in the first period. Tampa, which came in ranked fourth in the league on the power play, was held off the board in three advantages.

Tampa came in ranked second in the league in scoring, averaging 3.8 goals per game. But Crawford stood tall once again, stopping 25 of 27 and all three in the shootout to earn the second point. Bishop played a stellar game on the other end of the ice, stopping 19 shots in the first period and 37 of 39 in the game. Unfortunately for Bishop, Kane finished the job in the shootout to send the Veteran’s Day crowd home happy.