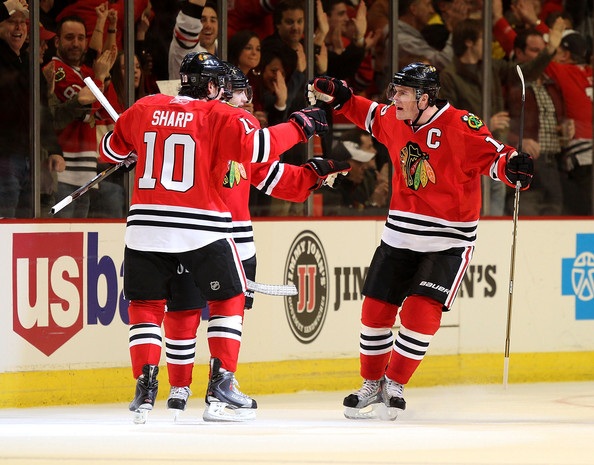 Where do we begin with the Blackhawks 6-3 win over San Jose from Monday?

Patrick Sharp tied a franchise record with four assists… in the second period. It hadn’t been done since Jim Pappin in 1973.

Patrick Kane became the third-youngest Hawks player to score 100 goals, behind only Jeremy Roenick and Bobby Hull. Not a bad class to be in.

Oh, and the Hawks jumped from seventh to fourth in the Western Conference with two emphatic points.

Niklas Hjalmarsson had a fantastic night all over the box score, scoring his third goal of the year, blocking three shots and finishing the night plus-three.

Jonathan Toews continued tearing apart the NHL. With his 30th goal and 41st assist of the season, he established a new career high of 71 points.

With two assists, Tomas Kopecky continued re-writing his personal stat history. His 27 assists this year are, alone, more points than he’s ever had in a season; he now has 40 points on the campaign.

The Blackhawks are getting contributions all over the ice. Heck, even Viktor Stalberg scored a goal, and Ryan Johnson won seven of eight faceoffs.

After a slow start – despite Duncan Keith telling Pierre McGuire pregame that a hot start was crucial – the Hawks exploded in the second period. Five goals, only three of which came against Antti Niemi before he was pulled, and the game was over.

The third period was treated as a formality by everyone except Ben Eager, who continually tried to run people.

If the Hawks needed a big-time win to spark another streak, it doesn’t get much bigger than hammering, and running, Niemi.