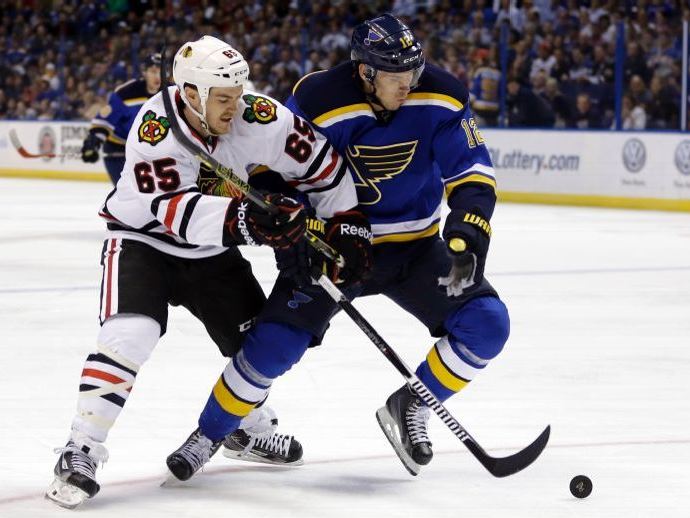 It took 57 minutes for the Blackhawks offense to show up, and when it did there wasn’t enough. The St. Louis Blues won in regulation, giving them the Central Division crown.

Meanwhile, the Minnesota Wild came back from a 2-0 deficit to defeat the Nashville Predators 4-2 in regulation. A regulation loss on Saturday could push the Hawks into a wild card spot.

Corey Crawford kept his teammates in the game again, but the lack of offense was once again dormant. Crawford made 23 saves, allowing only two goals but once again that was enough to beat the Blackhawks as his teammates continue to struggle to find ways to score without Patrick Kane.

The game-winning goal was scored by Paul Stastny after a puck bounced past Niklas Hjalmarsson, leading to a 3-on-1 that the Blues were able to convert.

Andrew Shaw was able to put a Jake Allen rebound into the net during a late 4-on-4 situation to give the Hawks some life, but even with Crawford pulled late Chicago wasn’t able to generate any quality scoring chances. Teuvo Teravainen set up the Shaw goal with a good, high shot off Allen that wasn’t handled cleanly.

One bright spot in the game was the play of rookie Kyle Baun, who was once again a physical force in only his second career game. Baun piled up six hits in only 10:53 and looked more comfortable, but all three of his credited shot attempts missed the net.

Brent Seabrook led the Hawks with four blocked shots, and took a couple David Backes shots off his knees late in the first and early in the second period. He was also credited with two hits in 22:06 but failed to put a shot on net.

Andrew Desjardins was pressed into a primary penalty killing role with Marcus Kruger out of the lineup because of an illness. Desjardins skated 13:28 in the game, 4:19 of which came short-handed. Unfortunately, he was on the ice when St. Louis scored their first goal. Kevin Shattenkirk eluded Desjardins and put a shot on net that Crawford didn’t handle cleanly, and Dmitri Jaskin made him pay.

Bryan Bickell was active, but didn’t put the puck in the net again. He led the Hawks with seven hits and was credited with one takeaway and had one big blocked shot.

David Rundblad had another rough night, and he continues to make the health of Kimmo Timonen critical for any Blackhawks postseason chances. One would hope that Michael Paliotta will make his NHL debut in Colorado this weekend given how Rundblad has performed recently, but coach Joel Quenneville has continued to dress both Rundblad and Michal Rozsival.

At this point, the best thing we can say about Rundblad is that he’s a liability.

If the Blackhawks had needed the standings to force them to have a sense of urgency, that time has come. With Minnesota on their heels, the Hawks now need at least one point on Saturday to face the Predators in the first round of the playoffs.