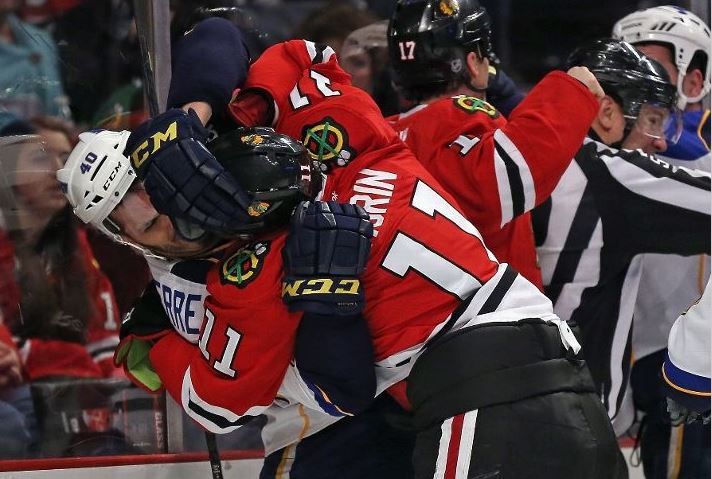 The Blackhawks were without Jonathan Toews, Patrick Kane, Johnny Oduya and Brandon Saad on Sunday morning when they welcomed the division leading St. Louis Blues to the United Center.

But another strong effort from all four lines extended the Hawks’ winning streak to three.

Jaden Schwartz scored a power play goal to put the Blues ahead less than two minutes into the game, but the Blackhawks defense was suffocating in the game’s first 50 minutes. The Blues managed only three shots on net in the first period and eight more in the second.

Jeremy Morin played hit third good game in a row and got the Hawks on the board in the second. Brian Elliott left a rebound in front after a Bryan Bickell shot, and Morin was able to put it home from a mess of players in front of the net. Morin now has a point in each of the last three games, and added an assist on Patrick Sharp’s goal in the closing minute of the second period.

Andrew Shaw handled a high puck and pushed it ahead to Morin, who did a nice job of setting up Sharp for the rocket shot. Sharp goal gave the Hawks a 2-1 lead through two period, during which Chicago held a 23-11 shot advantage.

Marcus Kruger tipped home a Joakim Nordstrom shot that got behind Elliott only 56 seconds into the third period to extend the lead to 3-1. Kruger’s goal held up as the game-winner.

Vladimir Sabotka scored to bring the Blues back to within one with 2:02 remaining in regulation, but Ben Smith scored an empty net goal to put the final nail in the coffin. Smith has scored in back-t0-back games and now has 13 on the season.

The Hawks were out-hit 40-23 in the game, a product of controlling the puck for the majority of the game. Bickell, Brandon Bollig and Nick Leddy led the Hawks with three hits each, and Bollig entertained his semi-annual fight with Ryan Reaves. Bollig was the only Hawks player to finish with less than 10 minutes of ice time, coming in at 8:30 on the day.

After the opening goal for St. Louis, the Blackhawks successfully killed three subsequent penalties; unfortunately, the Hawks power play failed on all four of their advantages.

In another close game, coach Joel Quenneville again spread out the ice time across the roster. Only Brent Seabrook and Duncan Keith skated more than 20 minutes in the game, with Keith’s 23:00 being the team-high. Shaw won only five of 15 faceoffs, but led all Blackhawks forwards by skating 19:01 in the game.

Morin saw 3:18 on the power play with Saad out of the lineup, and continued to look comfortable on a line with Bickell and Peter Regin.

Corey Crawford made 21 saves to earn his 31st save of the season, which is tied for seventh in the NHL. The win was also Crawford’s 113th for the Blackhawks, moving him within one of Mike Karakas for sixth in franchise history.

The Hawks are now off until Wednesday, when they host the Habs in their home finale.