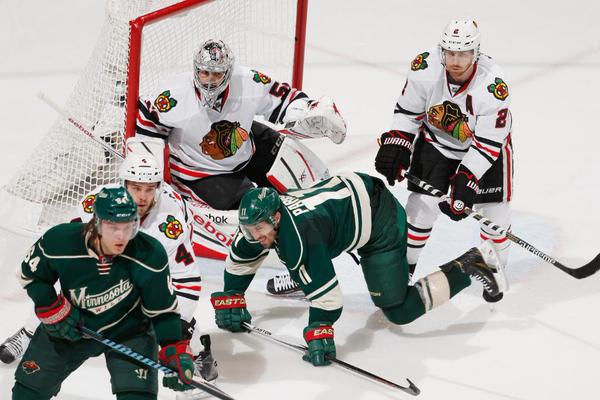 The Blackhawks eliminated the Wild on Thursday night, and the most telling stat of the series was easy to pick out: Patrick Kane scored five goals; the entire Minnesota roster scored seven.

Game Four was chippy from the opening drop of the puck, as Ryan Suter took a whack at any Hawks player within the reach of his stick on the first period. Suter wasn’t alone, though, as Matt Cooke joined in with his standard brand of dog crap “play.”

But as the other teams have found over the last three years, cheap shots don’t win a seven game series in the NHL postseason. And while Suter was hitting the wrists of his opponents, the Hawks were scoring goals.

Brent Seabrook banked a shot off Marco Scandella’s skate and past Devan Dubnyk in the first period to give the Hawks a 1-0 lead.

Even with the dirty play, the first period ended without either team sending a player to the penalty box and both sides putting eight shots on net. Corey Crawford was perfect in the opening 20.

Jonathan Toews, who took a nasty Suter slash across the wrists in the first period, was the first player to head to the box in the second. His teammates killed off the penalty, and Toews set up Marcus Kruger for a good scoring opportunity quickly after leaving the box. Nino Niederreiter hooked Kruger to break up the attempt and went to the box.

On the ensuing Hawks power play, Andrew Shaw slapped a loose puck past Dubnyk to extend the lead to 2-0. Erik Haula cut the lead in half less than four minutes later, but the the period would come to a close with the Hawks hanging onto a 2-1 lead.

The third period opened with strong back-and-forth play (and more cheap shots), but it went absolutely crazy in the final seven minutes of regulation.

At 13:20, Bryan Bickell made a nice pass to an attacking Kane who rifled a shot thru Dubnyk. It appeared Dubnyk anticipated contact from Bickell and allowed Kane’s shot to get past him and in. That goal extended the lead to 3-1, a lead many assumed would be enough.

Bickell went to the box for boarding at 16:02 and Mike Yeo pulled his goalie, a bold, desperate and necessary move. Unfortunately for Minnesota, the first goal scored on the power play was a short-handed empty net tally from Marian Hossa. That goal made the lead 4-1, and many of the fans in attendance started making their way to the exits.

But, as we said, Hossa’s goal was the first of that power play. Jared Spurgeon scored 49 seconds later – still on the same power play – to make the game a bit more interesting at 4-2.

When Niederreiter scored 51 seconds later to make the score 4-3 with 1:27 left in regulation, nerves started to wear thin all over Chicago.

A frantic final 80 seconds followed that saw Dubnyk rush to the bench, the Blackhawks take a penalty for too many men with 15 seconds left in regulation and Crawford making just enough saves to escape with the victory.

And then the brooms could comfortably come out. For the third straight year, the Blackhawks eliminated the Minnesota Wild. And for the fifth time in seven years, Joel Quenneville’s team will play in the Western Conference Final.

The extra days of rest waiting for the winner of the Anaheim-Calgary series will be needed. Sadly, it appears Michal Rozsival’s season (career?) may be over after a gruesome ankle injury in the second period. Thomas Vanek had a breakaway and Rozsival’s lower leg buckled. Crawford was able to make a big save on the annually underwhelming Vanek, but Rozsival wasn’t able to put any weight on the leg and needed to be helped off the ice.

For all the flaws in Rozsival’s game, he’s at least a battle-tested known commodity. Now, the Blackhawks will likely need more than the 8:25 skated in Game Four by Kimmo Timonen.

Who replaces Rozsival will also be very interesting. Because Rockford is still alive in the AHL playoffs, only Kyle Cumiskey has been recalled. Quenneville’s options are limited to Cumiskey, David Rundblad and rookie Michael Paliotta – unless someone else is brought up. Duncan Keith skated 29:39 in the elimination game.

Toews won 13 of 26 faceoffs and picked up two assists in the game. Bickell was only credited with one hit but also had two assists, and Kane added an assist to his goal in another stellar offensive performance.

Crawford finished the night making 34 saves against 37 shots and proved his doubters to be wrong in writing him off during the first round series. He was a key to the Hawks sweeping Minnesota.