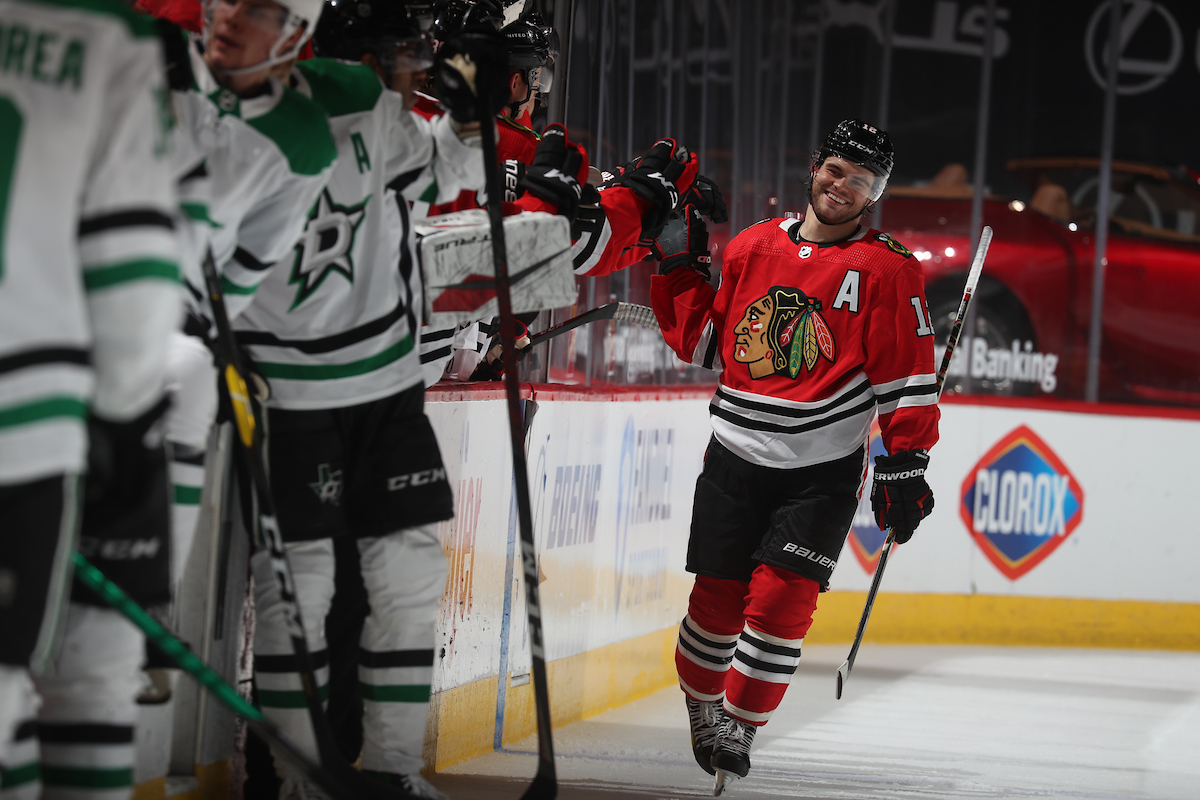 Vinnie Hinostroza returned to the Blackhawks’ lineup on Tuesday night. Lucas Wallmark slid through waivers and was sent to the taxi squad to make room for Hinostroza, who was given a number that should be retired by the Blackhawks for his second tour of duty in Chicago.

The Blackhawks came into the game against Dallas trying to turn around a brutal five weeks. Since beating Tampa on March 5, the Hawks are 4-10-0 and have fallen out of a playoff position in the division.

Thankfully, Dallas has been an inconsistent tire fire all year. So something had to give.

It appeared the Blackhawks were getting on the board 65 seconds into the game. Kirby Dach fed Patrick Kane who made one of the moves very few people on the planet could conceive, much less try. The goal went in, but Dallas asked the officials to take a second look at Dach’s skates.

The goal was taken off the board. But the Blackhawks weren’t turned off.

Kane and Dach flipped the script 12 minutes into the first period. Kane got the puck to his young teammate who scored his first of the season to give Chicago a 1-0 lead.

Kane became the third player in the NHL to reach the 50-point mark this season and joined another incredibly exclusive list in the history of the Blackhawks organization with his assist on the Dach goal.

Kevin Lankinen handled his end of the ice well in the first and the Hawks took their one-goal lead to the room after 20 minutes. Chicago had a 10-9 shot advantage after the first period.

It took almost ten minutes in the second period for the next goal to be scored, but the acquisition of Hinostroza paid immediate dividends. He set up Dominik Kubalik for the Hawks’ second goal of the night.

Chicago kept after the Stars. In the final minute of the second period, Chicago extended their lead to three with Alex DeBrincat’s 20th of the year.

Lankinen continued his strong play, stopping all ten shots he faced in the second period. The Blackhawks took a 3-0 lead and 21-19 shot advantage to the third period.

When the third period started, we already knew the Blue Jackets had defeated the Lightning 4-2. Nashville was in overtime against Detroit. The Blackhawks had a lead, but knew they had to hold onto it to keep their position steady in the standings.

So of course the Stars scored the first goal in the third period. Andrew Cogliano scored a short-handed goal 89 seconds into the third to cut Chicago’s lead to two. Adam Boqvist showed very little effort to hit the jets to compete with Cogliano on his breakaway, opting to hack him from behind and take a penalty that was negated by Colgiano finishing the play and getting Dallas on the board.

As the third period progressed, Nashville won their game against the Red Wings in a shootout.

The Blackhawks were bringing it from every part of the lineup. With 13 minutes left in regulation, the only Chicago skaters who hadn’t been credited with a shot on net were David Kampf and Pius Suter. All six defensemen had at least one shot on net and 10 of the 12 forwards had put the puck on net.

Inside the final seven minutes of regulation, Dallas found something. Hard shots off the boards behind the Hawks’ net were bouncing back to the front of the net and the Blackhawks defensemen were watching. With 6:13 left on the clock a hard shot wide of the net bounced back in front and Radek Faksa tapped it past Lankinen as Boqvist (again) and Duncan Keith watched.

Chicago’s lead was down to one.

With 1:48 left in regulation, Dallas emptied their net for the extra attacker. It looked like a loose puck in the blue paint was blown dead quickly about 15 seconds later, avoiding a potential disaster.

After Dach passed a potential empty net shot attempt with about a minute left, Kane did not. He made the deposit inside the final 10 seconds of regulation and the Blackhawks put a fourth goal on the board for the first time since they were in Dallas on March 11.

Lankinen stopped 25 of 27 in another really good effort.

Dach had one goal, two hits, three takeaways and won four of ten faceoffs in 19:44 on the ice.

Kane had one goal, one assist, two takeaways and finished tied with DeBrincat for the team lead with four shots on net in 22:32. DeBrincat matched Kane’s goal and assist in 21:17.

56 thoughts on “Blackhawks Hold Off Stars, Stay In Playoff Chase”